In April and May 1940, the Oxford team tests its brown powder on cats, rabbits, rats, mice and other animals. The animals stay healthy. They also discover that injection is the best way of administering the drug. If it is swallowed, the functionality disappears in the stomach. But they also observe that the medicine’s activity is restricted to the first few hours; much of the penicillin is secreted in the urine. As a consequence, the urine becomes a major secondary source. Fortunately, the researchers don’t test their substance on Guinea pigs. These don’t tolerate penicillin. The world would have been quite different if they had done so. Many of the animal tests are performed by Margaret Jennings.

Within a few days, enthusiasm mounts in the team, in spite of the war getting worse all the time. Penicillin appears still to be active if diluted very much (more than 1 million times), whereas the team finds no adverse effects on high doses. A major advantage over the sulfas, that are administered in a dose close to the limit of poisoning the patient. And penicillin appears to be active against a much greater number of harmful bacteria than the sulfas. Although tuberculosis cannot be cured with it.

The team scores a major result by the end of May as they treat eight mice. To be precise, on Saturday May 25 and Sunday May 26, 1940. They infect all eight mice with a carefully balanced dose of very dangerous streptococci. The mice will have to get ill but shouldn’t kick the bucket right away. Four mice get injected a varying dose of penicillin, one or several times. The researchers meticulously take down the scheme, and the development in the condition of the mice. The results are staggering. The mice without penicillin all die within the next two days. All mice injected with penicillin stay alive. Much later there is even more amazement, as it becomes clear how impure their penicillin was and how little of the antibiotic some of the four survivors got administered. Moreover, there is a real danger that impure penicillin contains toxic components. And Edward Abraham finds that some mould cultures don’t actually produce penicillin; he attributes this to an enzyme that breaks down the substance; he calls it penicillinase. Florey wants to move on right away and test dozens of mice; he asks Heatley to double production. That implies that he has to tap 200 litres of production fluid from mould cultures in his cold store, and process this amount in his complicated extraction devices; dry-freezing this will finally yield a few hundred milligrams of brown solid in a cooled jar.

Work while a war is going on

This is the weekend before the Dunkirk disaster; an allied army of 1.5 million men has been cornered by the Germans. A mere 350.000 of them are taken to England with an improvised fleet consisting of about anything that can stay afloat. More than a million men are taken prisoner of war. Britain seems to have been beaten and a German invasion seems to be imminent in just a few days. On May 28, Churchill, then just one month into the office of prime minister, announces that the British isles will not surrender and that their defence will be waged until the bitter end. He receives an enormous amount of support.

In spite of the looming war, the team progresses at great speed. More money comes in from the Rockefeller Foundation, they can now hire more staff (the number of staff most involved rises from 6 to 12); and they work almost around the clock. For the time being, they keep secret their results. In the months of June and July, they treat dozens of contaminated mice with penicillin and invariably, the results are better than expected. Chain and Abraham try hard to extract pure penicillin from their brown powder and establish its chemical formula. Heatley is tirelessly trying to secure cookie jars, biscuit tins, bedpans, tin cans, flat plates, oil cans, in short anything with a large flat surface.

The battle of Britain begins

France has now surrendered to the Nazis and on July 10, the battle of Britain has actually begun. People expect the worst and researchers are instructed to be able to destroy their work and results, in order to prevent them from being captured by the enemy. Heatley comes up with a brilliant idea to save their work on penicillin: smear penicillin spores into one’s clothes. There they can survive for months, maybe years, and can be revived later under more favourable circumstances. And they do so accordingly. Florey, Heatley, Chain and Jennings have their clothes impregnated with mould spores. The same happens to those of Gardner, a very patriarchal English researcher who has joined the team; he establishes among others what happens to the bacteria as they are besieged by penicillin.

The conditions are difficult and bizarre; best illustrated by the decision of the Florey couple to send their son (5) and daughter (10) to friends, a childless couple, in New Haven in the United States. The Yale University there has instigated a program to supply a safe haven to children related to Oxford University.

By now it is high time to publish the results. But before he puts anything into writing, Florey invites representatives of the industry. In July 1940, two prominent researchers of Wellcome Laboratories are being informed of all results and shown the lab. To his big disappointment, they show no interest! They are fully occupied with the production of vaccines and other war-related work. In their minds, scaling up cannot be done. And when suggested that penicillin is a simple molecule (they still haven’t cracked its structure) they suppose right away that it can be synthesized chemically in the future. A thought maybe inspired by the successes of the entirely synthetic sulfas. 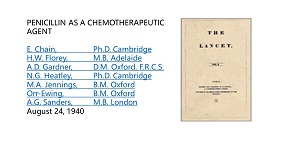 On August 24, they finally publish the results of their work on penicillin in The Lancet. A modest article that just spans two pages; in retrospect viewed by many observers as being of the same historic importance as Crick and Watson’s publication of DNA’s double helix structure in 1953. But for the time being, there is no such appreciation for the work of Florey and his team. The most important comments are those of the editors of the Lancet, and of the British funding agency. The editors urge the team to establish penicillin’s structure, long overdue; and to present clinical evidence for its antibacterial properties. And MRC, the Medical Research Council, is of the opinion that it hasn’t received enough praise for its funding compared to the American Rockefeller Foundation. Florey does write a polite letter of excuse, no doubt edited by Margaret Jennings; but he is right: MRC’s contribution was of minor importance.

And there is a visitor to the team: Alexander Fleming. He appears to be of the opinion that the editors of the Lancet are right in their judgement. Some 10 years ago, he says, he had more or less reached the same stage. Chain is somewhat surprised about Fleming’s visit. He thought that the good man had passed away. According to Fleming, the ‘only’ tasks to be done by the Oxford team are to purify penicillin, establish its chemical structure and find a synthesis starting from simple chemicals. That would deliver the final blow to the sulfas.

Are you a #Sustainability executive championing pragmatic ESG strategies? Do you know a leader who has built new business models and implemented emerging technologies? Then nominate them TODAY for Constellation's #ESG50: bit.ly/3u7Ioqj