Four major questions dominated the Oxford research on penicillin. We review them in good order.
1. How do we grow as much mould as possible, while maximizing penicillin production?
2. Which harmful bacteria will be attacked by penicillin?
3. Are there any harmful effects of penicillin on the body?
4. What is the chemical structure of penicillin, and what is its modus operandi?

Project ‘100 years of antibiotics’
Episode 16. The sulfas have the upper hand
Episode 17. The Oxford team
Episode 18. Penicillin beats the sulfas
Episode 19. The battle of Britain
Episode 20. Scaling up 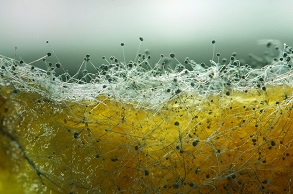 Penicillin mould floating on the surface of its  growth medium. Shutterstock:  324673886

Difficult research on the mould

The first question is by far the most difficult one. The mould grows in a shallow layer of water, 1.5 cm deep, a solution of glucose (sugar) and several minerals as nutrients. The green-blueish mould filaments protrude above the surface and drop spores into the water, from which grow new moulds. After some time, yellow-gold droplets form on the mould, that contain the penicillin. They can be removed with a pipette. But it is more practical to let the droplets fall into the water and drain the solution. Heatley’s first discovery is that one can refresh water and nutrients more than ten times; that doesn’t prevent the mould from growing. But afterwards, they discover that such a culture will be infected by an unwanted organism (a phage?); and therefore they use each culture just once.

At first, they cannot measure how much penicillin is being produced. The only possible test is to place a droplet of the culture containing fluid on a petri dish with bacteria growing on agar; and then measure how large the surface is that doesn’t grow any bacteria – a measure of the number of bacteria inhibited in their growth. Heatley devises an ingenious technique that allows them to perform these tests in large numbers.

All Heatley’s attempts fail to improve the medium on which the mould grows. But if he adds yeast, he succeeds in speeding up fermentation: from 20 to 10 days! He also finds that some experiments yield a lot of penicillin and that others don’t at all. He collects the spores of the high-yielding experiments in order to improve the mould’s productivity. 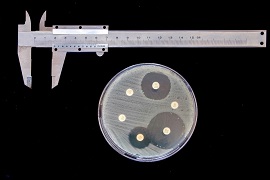 Petri dish covered with growing bacteria. The diameter of the clean circle around the white dots is a measure of the amount of penicillin in that dot. Shutterstock: 1798971754

But Chain is less successful. Just like Fleming, he succeeds in extracting the penicillin with ether, from the aqueous solution. But all attempts fail to isolate the compound from there, or to transfer it to some other liquid. That means to say: the antibacterial properties disappear. Because they don’t know which substance they are actually looking for, the only test to establish the presence of penicillin is testing for antibacterial activity. Chain starts to talk about freeze-drying; something new, back then. Heatley on the other hand would prefer to transfer the penicillin back into water by using a cold alkali solution. To Chain, that is nonsensical and moreover, he views it as interference with his work. This disagreement doesn’t serve to improve relationships. Heatley goes on as he prefers and constructs an ingenious extraction machine. All has to be done either in the cold store or outside in the winter cold. Upon freeze-drying the aqueous penicillin solution from Heatley’s machine, they obtain a brown solid for the first time, a compound with a very high antibacterial activity. If they solve this in water and dilute the solution a million times, it still shows antibacterial activity. ‘No sulfa can beat this!’ Chain writes in his diary. They calculate their compound to be 20 times as active as any sulfa, and therefore suppose that it is very pure penicillin. Although in retrospect, that isn’t even true.

How much of the brown powder they then have at hand? It is about 100 milligrams, 0.1 grams! With that amount, they can just perform two animal tests. Chain is dying to be the first to test the brown powder. But he needs to involve a colleague with a permit to perform animal tests. They inject a mouse with 2 ml solution containing about 50 milligrams of the brown powder. The mouse lives on happily. Chain is delighted: his preparation isn’t toxic! But why this joy? Fleming had proven this already and in his application at the Rockefeller Foundation, Florey had already remarked that penicillin isn’t toxic on mammals. The only new result is that penicillin has now been isolated as a solid. Florey is keen on participating in the experiment and receives instruction on how to inject a mouse in its tail artery. Again, this mouse doesn’t falter. Florey doubts if he has really injected into the blood stream and asks for a repeat. That requires the production of a new batch of penicillin. Now they are convinced that the injection has been done properly and neither this mouse is affected. But as Florey turns around the mouse, they observe a dark brown patch of urine that appears to have strong antibacterial properties. They conclude that penicillin is non-toxic and that the kidneys secrete the substance unaltered. 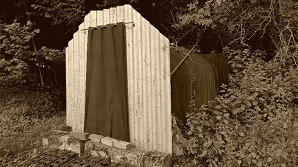 Anderson shelter from WW II;  approximately 2 million were constructed to protect against German air raids during the battle of Britain. Shutterstock: 671016910

By now, it is March 1940. The events just described are of historic importance – but only in retrospect. The protagonists don’t experience them as such. Progress in research is slow. They haven’t progressed much beyond Fleming’s results. Optimistically one could argue that they have already cracked two of their four questions: they can produce major amounts of penicillin, and the  substance appears not to be toxic in the body. They have to spend much time to war-related activities like digging air-raid, so-called ‘Anderson’ shelters. The war with Germany has been going on for half a year now, and a German invasion and bombardments don’t seem unlikely at all.

Personal relationships are tense. Heatley and Chain conflict over a detail, penicillin’s expected colour. With ‘German’ certainty, Chain knows that it will be a yellow solid. Heatley cautiously suggests that he might eventually obtain a white crystalline product. Authors judge that many tensions arise from Chain’s conflicting emotions. His mother and relatives are in Nazi Germany. His demeanour is German, in a country that is at war with that. He suspects covert antisemitism with regards to his Jewish descent. He has been naturalized recently, but remains suspicious in many areas. He isn’t well-supported by Florey. The latter’s interest in the work performed by his fellow-workers is as befits a professor back then, but there is not much social contact. He is not well-endowed with tact and empathy. Heatley is overjoyed that he can now report to Florey and is absorbed in his ingenious machinery; but then he goes his own way. Even if in doing so, he trespasses on his colleagues’ area of expertise. He does whatever he believes in and judges to be important.