You are here: Home / 2020 / November / Plastic recycling: urgent, but a major problem

Suddenly, articles on plastic recycling pop up everywhere. Spurred on the one hand by continued growth in plastics production; and on the other hand by the ever growing problem of plastic waste. Scientists foresee that in 2050, there will be more plastic waste than fish in the oceans – if present trends continue. Something needs to be done – but what?

This is the first of two articles on plastic recycling. We published the second article on November 22.

Already in 1924, there was talk of ‘The plastic age’. Image: Wikimedia Commons.

The June 2020 issue of the Dutch Chemie Magazine devoted to the problem of plastic recycling starts summing up plastics’ benefits. ‘Grace to plastic, our wealth and wellbeing have much increased over the past century. In its various forms, plastic delivers comfort, safety, durability, hygiene and energy efficiency. Plastic irrigation piping allows farmers to grow crops year-around, and polymer packaging ensures a longer shelf life of their products to food producers. In healthcare, wearing plastic gloves improved hygiene. Medical care improved through syringes, blood bags, implants, and recently through respiration equipment and masks. And the polyurethane in our mattresses ensures a good night’s sleep.’ Just a few applications to remind us that plastics are everywhere. In short: the material has become indispensable to modern life.

But then, equally valid are concerns about plastic waste. As the Plastic Soup Foundation tells us: ‘All the plastic that has ended up in the environment over the decades is still there. Due to weathering caused by sunlight and waves, larger plastic items break down into smaller pieces but they never disappear, and more and more plastic is floating in the ocean. Therefore, the concentration of plastic in water and in the environment is increasing rapidly (and especially microplastic). Although the problem was barely visible twenty years ago, there is now no place in the world where plastic is not found.’ Over the past decade, public concern over the plastic soup has soared. We need to do something about it. 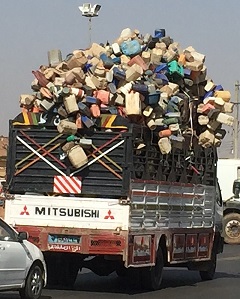 Plastics on their way to recycling in Sudan. Photo: Wikimedia Commons.

Chemical and Engineering News recently devoted a major article to plastic recycling. As it says: ‘Chemical companies and major consumer brands are betting that chemical recycling will help them achieve ambitious recycling targets. They will invest billions in new projects over the coming decade. Environmentalists, however, are sceptical. They think chemical recycling is a smoke screen for keeping business as usual, for not much of an environmental improvement. And they doubt the projects will get off the ground. Using less plastic, they say, is the best option. But industry maintains it is on the threshold of proving the technology.’

Optimism is a virtue. But reviewing the figures, it is hard to maintain industry’s optimism. An equally recent article in Science explored several scenarios on plastic recycling. How fast and effectively could these technologies reduce plastic pollution? The authors modelled the global plastic system in five scenarios between 2016 and 2040. The results are discouraging, to say the least. All feasible interventions together would reduce plastic pollution in 2040 by 78% relative to ‘business as usual’ – but this is only 40% below the 2016 rate. So, even with immediate and concerted action, in this period at least an additional 710 million metric tons of plastic waste will enter the environment. In short, ‘coordinated global action is urgently needed to reduce plastic consumption; increase rates of reuse, waste collection, and recycling; expand safe disposal systems; and accelerate innovation in the plastic value chain.’ The latter is essential. At present, plastic recycling techniques are inadequate. Just a few recycling technologies deliver what is required. And then just for ‘clean’ plastic waste. Not for plastics contaminated with food rests or even with other plastics.

The plastic soup problem is fundamental to our affluent society. In just a century of plastics use, mankind has succeeded in contaminating each and every place on Earth with plastics. What to do? Chemical and Engineering News sums up five options for plastic recycling.
– Mechanical processes. The most common recycling method. Plastic waste is washed, shred and repelletized. Only applicable on ‘pure’ waste streams, consisting of just one kind of plastic. Even so, mechanical recycling amounts to downcycling, as the products have somewhat inferior properties when compared to ‘virgin’ plastic.
– Gasification. Here, plastics and other municipal waste, such as textiles and paper, are gasified under low-oxygen conditions. The product is syngas, a mixture of carbon monoxide and hydrogen. A raw material for chemical industry. Gasification is a rather expensive process.
– Pyrolysis. Plastic waste is heated under oxygen-free conditions and temperatures above 400 °C. It breaks down into smaller hydrocarbons, such as diesel and naphtha, which can be the starting point for new plastics. Pyrolysis is an energy intensive process and also amounts to downcycling.
– Depolymerization. Here, plastics are broken down into their original building blocks. Applicable particularly to PET – but then, PET is already widely recycled by mechanical recycling.
– Solvent-based processes. The pinnacle of recycling, the subject of much research. Plastics are dissolved; impurities are filtered out and the polymers reconstituted. The result is nearly equivalent to virgin polymers. Polystyrene and polypropylene are among the plastics reclaimed in such processes.

So far, no process stands out as a solution on the scale required. Mechanical recycling is successful only starting from clean and pure waste. This requires an excellent collection organization. Most plastic waste consists of a number of plastics, contaminated with impurities. Other processes than mechanical recycling have a difficult time proving their cost-effectiveness. Often, they also deliver substandard products. It now dawns on industry and policy makers alike that we need to redesign the entire plastic loop. Including design-for-recycling, better collection schemes and policies to match them. We will look into that issue in the next article.

Interesting? Then also read:
The role of chemistry in the reduction of plastic waste
Plastic recycling: many technologies available, no winner, says Lux Research
Chemical recycling of mixed plastic waste