Quickly, the world gets critical of plastic waste. It litters land, waterways and oceans. Until quite recently, rich countries could export their waste to poorer countries – for them to sort out the difficult tail of consumer society. But since China banned such imports in 2018, each country needs to deal with its own waste. Which proves to be more difficult than expected. Fortunately, the first steps on the road of chemical recycling of mixed plastic waste seem to be encouraging. 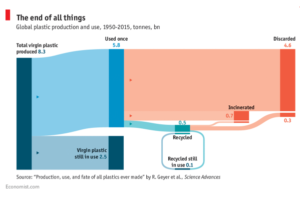 Since 1950, more than half of all plastics produced were discarded. Figures in billion tons. All in all it is a disaster (click to enlarge).

One of the pioneers in this field is the Saudi company SABIC. In its test facility in Geleen (the Netherlands) it produces certified circular polymers from a feedstock of mixed plastic waste. It first turns this feedstock into a patented pyrolysis oil and produces chemicals and polymers from this. As part of the market foundation stage, the company has begun to produce and commercialize the first monthly volumes of certified circular polyethylene (PE) and polypropylene (PP). SABIC envisages to start up commercial production in 2021.

‘Certified circular polymers are a disruptive innovation and SABIC’s market foundation stage is a critical phase in their development,’ said Frank Kuijpers, General Manager Corporate Sustainability at SABIC on their website. The polymers are certified through the International Sustainability and Carbon Certification plus (ISCC+) scheme. This certifies circular content and standards across the value chain from source to end product. The ISCC+ certification works on what is known as a ‘mass balance system’, meaning that for each tonne of circular feedstock fed into the cracker and substituting fossil-based feedstock, a tonne of the output can be classified as circular. 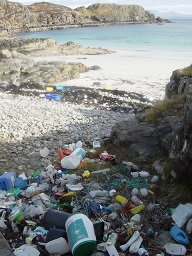 ‘We are supporting greatly the mechanical recycling of plastics but we believe that the long term sustainable circular economy will lie in chemical recycling of mixed plastic waste,’ said Al-Fageeh, SABIC’s executive vice president for petrochemicals to Recycling International. Units such as these could be an integral part in the circular economy model as they help to create new feedstock supply while at the same time protecting the environment, he added. He looks upon it as an important step towards the circular economy. And the company has found a large customer: Unilever. They started using recycled plastics from this ‘Trucircle’ production line, to package brands like Magnum, Knorr and Evercalm.

Pyrolysis oil, SABIC’s intermediate product, is produced by heating organic matter, like mixed plastic waste or wood. It is known to be a difficult, highly corrosive product. Unlike crude oil, it contains much oxygen, and for most purposes, like incineration, it needs to be purified first. The Australian company Licella has taken a different pathway: it uses supercritical water as its first step to chemical recycling of mixed plastic waste. The patented technology was created by Len Humphreys and Sydney University professor Thomas Maschmeyer, who say it could process plastics that cannot currently be recycled. Their process will also produce an oil, that can be turned into bitumen, petrol or back into different kinds of plastics.

The Australian website abc.net.au reports that Licella is going to build its first commercial recycling plant in the UK. This CAT-HTR technology also enables companies to process any plastic. The waste does not have to be separated according to type and colour, and can recycle anything from milk cartons to wetsuits and even wood by-products. It also means that plastic products can be recycled again and again. But, according to professor Damian Guirco, a director at the Institute for Sustainable Futures at the University of Technology Sydney, technologies like these could be just one part of the solution. ‘One technology is not going to be a silver bullet,’ he says. ‘The bigger problem to address is our over-consumption of plastic.’

And then there is the sustainable technology company Anellotech. It developed Plas-TCatTM, a new process technology aiming to convert a wide range of plastic waste directly into chemicals. These again can be used for production of new plastics, thus building a complete circle of recycling of mixed plastic waste. Plas-TCat is an extended application of Anellotech’s Bio-TCatTM process, that converts biomass into bio-based chemicals and biofuels.

According to its press release, Anellotech wants to develop Plas-TCat so it could convert the majority of plastic materials used today, including composite films. Eventually the company aims to develop and design a commercial plant to efficiently make commodity chemicals at large scale, using the same basic process configuration. It has disclosed little of the process characteristics. So far we just know that the process is catalyst driven. The pilot plant ran on biomass 24/7, and the company expects it to do the same with plastics. ‘Plas-TCat has the potential to transform plastic waste such as composite films, mixed plastics and plastics with biomass – such as paper labels – directly into valuable chemicals,’ says David Sudolsky, President and CEO of Anellotech. ‘It can handle oxygenated polymers, an important advantage over pyrolysis processes that produce complex oil mixtures which require upgrading and additional conversion in steam crackers.’ Anellotech hopes to develop its technology so well that it can pay for plastic waste and organize chemical recycling of plastic waste on a commercial basis. This could result in a substantial reduction of plastic waste in developing countries that generally don’t have a public infrastructure to collect waste plastic.

The silver bullet does not exist

The advantage of all these processes that they don’t require mechanical recycling: the selection of the most valuable plastics from a complex waste stream. Moreover, these processes seem to be able to handle laminates as well, known for the problems they pose to recycling. They all convert the mixed resource into a mixture that resembles somewhat crude oil – a substance that we have learned to process in the past century. But all in all, processing this resource into valuable plastics again will involve many process steps. Without proper incentives, this may stand in the way of commercialization. Therefore, we need to explore other pathways as well. Like deposits on plastic bottles and other plastics, and mechanical separation techniques. The problem of plastic waste is urgent. Chemical recycling of mixed plastic waste is just one of the processes that we need to develop, albeit an indispensable one.

Interesting? Then also read:
The role of chemistry in the reduction of plastic waste
Plastic litter: strict regulation is the only remedy
New Plastics Economy: circular, not yet biobased