You are here: Home / 2020 / September / New technology for drinking-water production

Researchers at Monash University in Melbourne, Australia, have developed a new technology for drinking-water production. They use metal-organic frameworks (MOFs) that remove ions dissolved in salt or brackish water, producing potable water. The MOFs can be regenerated quickly, under the influence of sunlight. Therefore, this results in a scheme of producing drinking-water from salt water with help of sunlight. As the researchers say: the entire desalination process is energy-efficient, low cost and sustainable. For use in actual practice, it still needs to be scaled up. 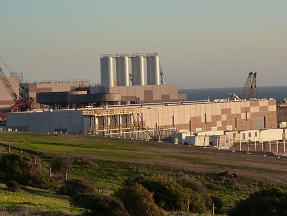 Drinking-water is a basic necessity of life

MOFs consist of an organic compound containing metal ions. They form crystalline, porous structures and have the largest surface of any material known to us. In this case, the researchers use MIL-53 (spongy aluminium terephthalate) in which they polymerize a ‘spiro’ compound; here spiropyranacrylate. This compound is called ‘spiro’ because it contains two carbon rings connected at one single carbon atom; therefore, these rings are perpendicular to each other. In the dark, or under the influence of UV light, the ‘spiro’ bond breaks up, forming a so-called zwitter ion. That is a molecule with a plus charge in one location and a minus charge in another one. The plus charge captures the negative ions from the salt water, the minus charge captures the positive ions. Irradiation with visible light will restore the spiro bond and the salt is ‘squeezed out of the sponge’. The thus regenerated spiro can be used again to desalinate water. Very well explained on the site of scientias.nl (in Dutch).

There is a great need for fresh water. According to scientias.nl, one third of mankind doesn’t have a secure supply of drinking-water. And this will get worse. In 2025, 1.8 billion people might live in areas with insufficient water supply. Climate change will exacerbate the state of affairs. Therefore, production of fresh water from seawater is a subject that draws a lot of attention and research. The problem of existing technologies is that they are costly and require much energy. Most commonly used is reversed osmosis. Here, salt water is pressed through a membrane that acts as a barrier to dissolved compounds. But cleaning fouled membranes is always a problem; and the high energy requirement and the cumbersome and slow process are clear disadvantages. 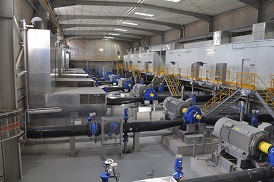 The new technology will carry many benefits. The process is fast, requires little more than sunlight and does not require an elaborate infrastructure. And it works well at the small scale. This technology will therefore allow us to desalinate water even in remote areas without a proper infrastructure. ‘Our method may be part of a global solution for the water problem,’ says research leader Huanting Wang to scientias.nl. And he looks beyond this stage. He hopes that sunlight responsive MOFs might be able to harvest solar energy in multiple ways. For the time being, the researchers concentrate on scaling up this technology. Not an easy task, as history shows us. But if they succeed, the technology will help millions who at the moment can barely afford clean drinking-water.

Interesting? Then also read:
Solar energy will soon dominate the energy system
The circular economy, a society without infrastructure?
From solar panel monoculture to multiple land use