You are here: Home / 2018 / August / Earth Overshoot Day, or the power of doomsday messages

This year, August 1 is Earth Overshoot Day. Each year, this is the day at which mankind has used up its stock of biological resources for that year. Never has this Day been so early in the year, meaning that we have never depleted the Earth’s resources so fast. But it would be fairer to say that the Day has plateaued since 2010. Why do concerned scientists always have to stress the downside of their messages? 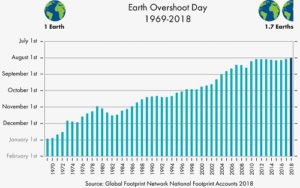 Earth Overshoot Day, 1969-2018 (click to enlarge). In the graph, we recognize China’s quick heavy industrialization (2000-2010) and its emphasis on efficient energy use afterwards.

The concept of Earth Overshoot Day is powerful: in one single outcome, easy to understand, it expresses many unsustainable activities of mankind. The Global Footprint Network should by all means go on with this work. But the downside of the conceopt is that is serves both a scientific and an activist goal. As an activist concept, it suffers from the unwillingness of people who don’t want to hear this anymore. This can be exacerbated if the messengers start shouting ever louder. As a scientific concept, it is the expression of just a few (albeit important) variables that determine the sustainability of mankind’s activities. The most important one is the ecological footprint. A country’s ecological footprint is an estimate of the biological resources required to satisfy its population’s needs, and the absorption of its carbon dioxide emissions. The latter factor tends to dominate the calculation of the footprint, meaning that this footprint (and Earth Overshoot Day) is primarily dependent on the level of fossil fuel use. But there are many other variables, as Robert B. Richardson indicates in The Conversation. He judges that the footprint underestimates mankind’s effect on the Earth’s environment, as it just measures land requirements, and disregards factors like soil erosion, runoff of nutrients and water overuse. 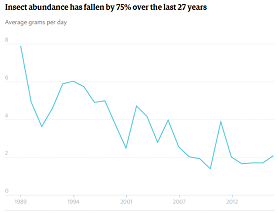 Insects in Germany over the past 27 years. Image: The Guardian.

‘Innovation cannot save us’

So one researcher’s pessimistic message can always be outbid by the next one’s. An entire body of scientific literature is growing that shows this tendency. As an old environmentalist, I am always tempted at first to believe them. You may remember, last year, the message that in the past 27 years, 75% of German insects has disappeared. But was this true? Unfortunately, this study was weak in its statistics – measurements weren’t consistent, and if we should leave out of consideration peaks in the graph, or just would start it 2 years later, conclusions would have been much less dramatic. Nevertheless, the authors could still be largely right. Then there is a growing mountain of econometric calculations showing that mankind uses far too many resources. This research concludes that we should cut back strongly in global wealth. Each of these studies claims that they have proven their point beyond doubt. Unfortunately however, such econometric models essentially rely on the past. Each of them repeats the observations and relationships from the past decades, and never (just never) looks into technological developments and present-day innovations, that will surely dominate the future relationship between materials use and GDP. Also, they have trouble taking into account the increasing level of reuse of products. Nevertheless, each of these studies will happily (and pessimistically) conclude that we are ‘heading for an ecological collapse’ and that ‘we cannot innovate our way out of planetary disaster’.

Why do scientists (and scientific journalists) committed to the cause of sustainability so often stress the downside of their messages? Probably because they try to shout louder, for fear of not being heard. But then, many people may shut their ears precisely because of all this shouting. They may prefer rays of hope. They might even be prepared to change their lifestyles if they were convinced that this would have an effect. And then, there is still room for optimism. We devoted an entire book to the possible effects of present-day technological and social developments towards precision; these could have a major impact on our footprint. We are not there yet, by far. But mankind should be able to develop combined political/scientific programs, that formulate clear technological targets from environmental data with the intent to firmly implement these innovations. How to save the world, as it were, in the vein of the Paris 2015 climate agreement, imperfect as it may be. The plastic soup problem calls for a similar approach: technological solutions are there or can be developed, if only there would be a firm commitment to the goal of ending plastic pollution. Such programs might convey other messages than doomsday predictions, messages that might get people going. Then we might even ‘innovate our way out of planetary disaster’ and see Earth Overshoot Day recede towards the end of the year.

Interesting? Then also read:
Economists, listen: the Earth is NOT a closed system!
Doughnut economics, or why economists should learn more about technology
Wrong question: can we decouple environmental impact from GDP growth?