You are here: Home / 2018 / May / Wrong question: can we decouple environmental impact from GDP growth?

These days, my inbox is overflowing with messages from concerned scientists warning that mankind cannot pursue economic growth forever; that it should deviate quickly from such a course, in order to prevent global environmental disaster. But as much as I sympathize with their cause, I feel that they are barking up the wrong tree: they pose the wrong question. Both the concept of GDP and that of decoupling tend to become meaningless. We should set aside GDP and start to use GDS: Gross Domestic Satisfaction. 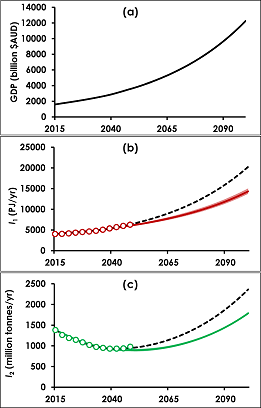 The exponential curve is back, after having been banned for a while after cricism of the Limits to Growth report. From top to bottom: global GDP, energy use, aggregate materials extraction. Illustration from Ward et al.

This discussion is of major political importance, as policy makers all over the world will answer, when confronted with this problem, that they have taken care of this: ‘green growth’ will reconcile the two seemingly radically opposite notions of economic growth and sustainability. The concerned economists warn that there is no such thing as green growth, and that pursuing this goal will turn out to be a recipe for disaster. The discussion that they wage on this matter of major importance is very abstract. They model both human economic activity and environmental impact very coarsely, e.g. as GDP and as energy or aggregate materials use respectively. Among them, the discussion boils down to the issue: can technology dematerialize faster than global GDP growth, whether 2% or 3% p.a.? But then, most of them have very little insight in technology. They hardly ever look into the characteristics of modern technology or try to establish its potential. They think they can judge future technological developments by establishing trends from the past. Therefore, many elaborate model exercises can hardly be called scientific. For instance, Ward et al. on the one hand assume that increasing fuel and materials efficiency will meet physical limits pretty soon (without looking into, or even mentioning any specific technologies), but on the other hand see no absurdity in suggesting a continuous 3% global GDP growth (well above present trends) until after year 2100. And Hickel uses an example that clearly illustrates his lack of understanding of modern technology: ‘you might be able to produce a wooden table more efficiently, but you can’t produce a table out of nothing. In the end you’ll need a minimum amount of wood.’ It clearly escapes him that producing a table is not a good metaphor of modern technology. Wrong question, wrong answers. (By the way, the communication on physical limits is not true, at least for the time being, except for LED lights and, in a few decades’ time, batteries). 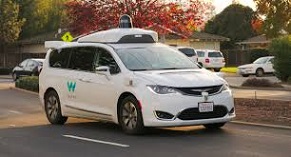 The combined effect of self-driving cars and car sharing might be a major reduction in the demand for new cars.

GDS instead of GDP

As Alle Bruggink and I argued in our book More with Less, Welcome to the Precision Economy, present technological developments eat into the very concept of GDP. This is not because GDP does not take into account externalities, like environmental degradation (the classical objection) but because in the future, GDP figures will tend to misrepresent economic activity itself. Precision technologies, the advent of which we highlight in our book, have a double effect: better consumer satisfaction, and lower resource use (including less repair of environmental damage done). We suggest that generally speaking, precision technology will be beneficial to mankind: it will produce exactly what the consumer wants without the historic concomitant side effects. But on the level of GDP, precision technologies might have the opposite effect. ‘Precision non-invasive surgery might well reduce adverse health effects, and therefore reduce the number of patient-days in hospitals…. Better resource efficiency in industry and miniaturization, taken together, might greatly reduce demand for minerals and fossil fuels. Car sharing might result in a lower demand for cars. Self-driving cars and car sharing could reduce the demand for cars, maybe to 10% of the present level. And such effects might be passed up the production chain and add up cumulatively…. GDP might not grow anymore, or even drop. Whereas ‘wealth’ in the only meaningful definition of the word, the amount of satisfaction enjoyed by the citizen, would continue to grow!’ (p.270-271). GDS instead of GDP!

As we now question the meaning of GDP itself, the issue of decoupling environmental impact from GDP growth will become more and more meaningless: it’s just the wrong question. Nevertheless, there may be answers to the all-important question raised above: will the Earth be able to accommodate a world of 10 billion people enjoying middle-class wealth? Our book deals with this. Technology is at the heart of the answer, yes, that same technology questioned on its effects by the concerned economists. We argue that Factor 10 improvements in technology will be required for compensation of population growth and wealthier people, and for repair of environmental damage done in the past; and that many technologies will be able to live up to that challenge. Among the Factor 10 improvements in the past, we mention the price of solar panels and eggs, the number of casualties per kilometre driven, the effect of PE cucumber wraps on cucumber degradation, and the amount of mercury required to produce 1 dollar of GDP (remember, in the Limits to Growth report, mercury was among the first resources to be depleted). In fact, our book is one long essay on the potential of Factor 10, driven by the greatly improved performance of innovative materials. New materials are still not in the forefront of thinking about technology; but they play a major role – think PV technology and biocompatible materials – often enhanced by ICT.

From the wrong question towards more adequate ones

As for GDP, we suggest that we need to detach ourselves from this single parameter supposed to be an adequate measure of all economic activity. Instead, we should measure economic performance through an array of parameters. Like the speed of cutting back material resource use in our end products; the efficiency of energy use; the amount of circularity in the economy; the Gini index, that measures equity and fairness in society; the development of biodiversity. True, policy makers would not have one single figure any more that would direct their actions. But in course of time, this variety of parameters might be joined into a new single parameter, let’s call it GDS, by a new Simon Kuznets, the developer of the GDP concept. That might steer us away from asking the wrong question towards more adequate ones. And as for economic policy: yes, the concept of green growth may be used just for comfort, in order to mask that we are indeed steering towards the abyss. We should learn to measure our performance by the parameters just mentioned, and above all stimulate the great variety of new technologies that carry a Factor 10 promise.

Interesting? Then also read:
Economists, listen: the earth is NOT a closed system
Doughnut economics, or why economists should learn more about technology
Plastic waste: let’s put an end to it in 10 to 15 years