Within one month, three reports about genetic technology in crops. And on top of that, a trend analysis for the entire biotechnology, one month before. All four of them downloadable and very readable. I will shortly review them here. 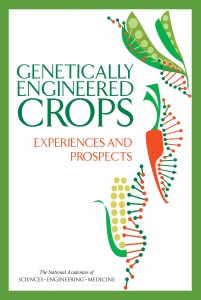 Released May 2016, just under 40 pages, colourful, informative for a broad audience, that is GM plants – Questions and answers, a study commissioned by the UK Royal Academy of Sciences. The report answers eighteen questions that are on people’s minds, as shown by preliminary inquiries. Some basic knowledge is provided in answers to the first question What is genetic modification (GM) of crops and how is it done? And the third question How does GM differ from conventional plant breeding? And to the other questions, the authors provide concise and factual answers in non-scientific terms. They do not go into political and socioeconomic aspects, nor into new technologies like CRIPR-Cas9. Fortunately, the book does not intend to smooth out controversies in the debate on genetic modification; it rather intends to stimulate discussion on our future food production technologies. It is short and readable, reading it takes just an hour.

Our next report is much longer, reading it will take at least a day. Four hundred pages, released 17 May 2016, a lot of well-documented information, without unifying and definite answers, that is my judgment on the report of the Committee on Genetically Engineered Crops: Past Experience and Future Prospects. It is a mega study commissioned by the American National Academies of Sciences, Engineering & Medicine. But it will certainly not put an end to the continuing controversy on genetic modification. Proponents and opponents cite from it what suits them best. The antis will love passages like: ‘In areas where planting of herbicide-resistant crops led to heavy reliance on glyphosate, some weeds evolved resistance and present a major agronomic problem.’ The man in the street will surely not read this hefty volume. Who will, then? I fear that it will be just a few, including the members of the committee that had to read (part of) it professionally. As for me, I scanned it so far, and will be reading much more of it soon. It is a comprehensive and well-written report that extensively treats history, present and future technologies, including gene-editing technologies. A valuable new study; but it will not bring both sides together, unfortunately, maybe even heat up the fire.

The recent report GM crops: global socio-economic and environmental impacts 1996-2014 was published 1 June 2016, written by Graham Brookes and Peter Barfoot, founders and directors of PG Economics Ltd, UK, a consultancy firm specialised in plant biotechnology, agricultural production systems, agricultural markets and agricultural policy. The report shows that developing countries are the main beneficiaries of genetically modified crops. It builds upon earlier reports, all of them accepted for publication in scientific journals, in order to guarantee neutrality. In the past, the firm has met with fierce criticism of anti-biotechnological associations, as they perform studies for Monsanto, like this one. Nevertheless, a rich source of information that completes the other reports.

The last report that I saw, was published a month earlier than the others, in April 2016. It is in Dutch, called Trend Analysis Biotechnology 2016 – a Deconstruction of Regulations. My attention was drawn to it by a review in Bionieuws, 18 June 2016. The report is a joint publication of the Dutch Committee on Genetic Modification, the General Health Council and the Scientific Council for Government Policy (WRR). The chairman of the committee that drew up the report, Frans Brom, says about it: ‘It seems as if we have been flooded with technological developments recently. Scientists have a habit of telling us that some development is urgent, but now this is really true.’ Brom means large-scale sequencing and CRISPR/Cas that have a strong stimulating effect on other technologies, like genetic therapy, DNA diagnostics, personalised healthcare, plant breeding and synthetic biology. Genetic and cellular technologies penetrate into other research areas and sectors: they have become mainstream and much less stand-alone technologies. The headline in Bioniews runs: ‘The Trend Analysis Biotechnology 2016 rings the alarm bell: out-of-date legislation and ethics cannot handle this technological revolution.’

@SacStateCarlsen We’re so excited to see what #CircularEconomy innovations come from this competition! ♻️🙌

This should grab your attention - Turning CO2 into energy - tell us more ? Sustainabile energy is the problem - innovation is the answer ! bit.ly/3HCa0vo #innovation #disruption #sustainable #SmartPlanet #solar

We are excited to partner with @wpwma1978 on the #CircularEconomy Innovation Competition to discover innovative solutions to #repurposewaste! #sustainablility #wastemanagement #innovators #researchers #entrepreneurs #untappedwastestreams #valueproposition twitter.com/sacstate/statu…

This is the future and it should start right now in communities and organizations of all sizes. A no brainer. #DefendingAnimals #sustainability #OneHealth twitter.com/BetterFoodFdn/…