At the bio-based conferences in Amsterdam this week, organised by Bio-Based World News, innovation awards were granted to Synbra and BioBTX. 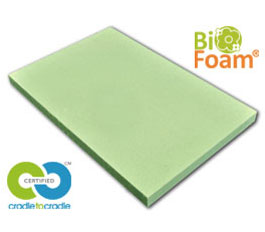 The winner of the Bio-Based Product of the Year (Europe) 2016 was ‘Greeny’, a new line of ice containers made from BioFoam® by Synbra and recently launched In Italy. Synbra is one of the companies that develops PLA for many purposes. Its star product is BioFoam, a product that resembles EPS (styropor) and can be used as a substitute in most applications. The main difference being of course that EPS is produced from fossil resources, and BioFoam from sugar (cane or beet). Therefore, the latter has a much lower CO2 footprint. BioFoam has already found many applications: as trays, ice cream containers, transport boxes and insulation material. Peter Matthijssen, Commercial Manager, at Synbra Technology said: ‘We were very glad to receive recognition by the jury and win this award, which is a real motivator for all the people involved. We believe it will contribute to the success of BioFoam® in the market and hope that many more products will follow in the coming years.’
Runner up was Bioserie with their bio-based baby toys with Lumir’s bio-fibre based acoustic coating to decrease reverberation indoors being voted Highly Commended.

The Bio-Based Chemical Innovation of the Year (Europe) 2016 was won by BioBTX for their terephthalic acid from crude glycerine which has made it possible to convert waste streams, with high efficiencies into valuable products. Dr Niels Schenk, Chief Technology Officer at BioBTX [link] on winning the award; ‘BioBTX has developed technology to convert crude glycerine, a side stream of biodiesel production, into key chemical building blocks such as para-xylene. With these chemical building blocks, it is possible to make performance materials out of biomass. We are very honoured and proud of this award! We have a major announcement in June, so make sure you follow us on twitter (@BioBTX) or linkedin!’
Runner up was the Ohio Soybean Council with their patent-pending Soy-PK Reactive Oligomer Cross-Linker resin with Covestro’s new bio-based crosslinker Desmodur® eco N 7300 being voted Highly Commended.

The winners received their trophies at a ceremony at the end of the second day, of the Bio-Based Chemicals and Bio-Based Products event in Amsterdam. A North American edition of the Awards will take place in September in San Francisco and the European edition will return in 2017.

I've just updated my webpage with some great articles. Check it out pastorbobbysretreat.com/?shar… Special thanks to @aliceleung @ECCJorg @JenniferRDeVore #sustainability #technology

Our newest addition to the farm just arrived! Farm visitors will be the first to know about them. This will add to the practice of #sustainability and bring great joy, any guesses? #farmvisit pic.twitter.com/ID9rsghr8p