What is biomass? Biomaterial, a source of energy or both? The answer depends on who you are, and where and when you live. Traditionally defining biomass was the domain of ecologists and agricultural scientists. Ecologists are likely to say ‘biomass is the total mass of living matter within a given area’. However, plant physiologists and agricultural scientists may answer something like ‘biomass is plant material or agricultural waste used as a fuel or energy source’. Plant material in turn is the product of photosynthesis. Looking for a definition of photosynthesis one finds roughly two kinds of answers, one emphasizing solar energy conversion and storage, and the other one focusing on producing materials. 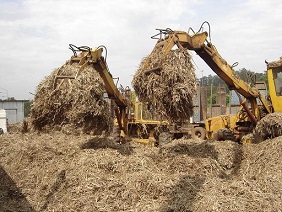 Starting with the oil crisis of 1973, Brazil started the large scale production of bioethanol from sugarcane for use in cars. Since that time biomass began to be viewed among engineers as a source of energy. With the global change concerns emerging in the nineties, biomass and the biofuels derived from it were embraced by policy makers and politicians alike as a panacea to fight the ever-increasing CO2 concentration in the Earth’s atmosphere. It also marked the beginning of biofuel as  ‘CO2 in a tank’. It was conveniently forgotten that both first and second generation biofuels are derived from crops or crop residues. A crop not only requires CO2 but also land, water, nutrients, fertiliser etc. In recent years it is more realized that converting crops like corn, wheat or sugarcane into biofuels competes with their use as human food or animal fodder.

Food is the priority in growing and processing biomass

Energy carriers like gasoline and food have one thing in common: once used they are gone. Therefore food needs to be continuously freshly produced forever. Moreover, food is perishable and is needed in ever larger quantities for the still rising human population. Finally there is as yet no viable artificial substitute for food; contrary to fossil fuels and materials. Fossil energy resources can be substituted by renewable resources like solar, wind, hydro and hydrogen. Unlike energy carriers, materials like polymers can be recycled many times and if need arises their energy content can still be harvested. Fossil-based polymers and other chemicals can be substituted by equivalent biobased materials. The often predicted slow changeover from fossil-based to biobased materials may be influenced by the current large scale production of shale gas in the USA. Ethane and other higher alkanes that were usually produced in naphtha crackers are now often obtained from shale gas. Therefore several old oil refineries have now been closed or mothballed, sometimes leading to a shortage of fossil feedstock for polymer production.

Summarizing, agricultural land should primarily be used for growing food and fibre products. The non-food components of biomass should preferably – and certainly in the long run – be converted to biopolymers and other biobased chemicals. In specific cases such as converting strongly heterogeneous low value biowaste streams to methane and higher alkanes, biofuels may continue to play a role in the transition to an all renewables-based energy system. Yet, whether one views biomass as a biomaterial or a as source of energy, it is very likely to remain food for thought for a long time.

Ton Schoot Uiterkamp is an em.professor of environmental sciences University of Groningen, the Netherlands