You are here: Home / 2015 / June / A discovery that could lead to sustainable electronics

Consumer electronics constitute a rapidly increasing source of waste. Cell phones, tablets and the like are typically made of non-renewable, non-biodegradable, partly environmentally toxic materials. A newly developed chip, in which the metal substrate has been replaced by wood fibrils, could pave the way for more sustainable electronics. 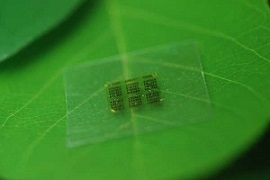 ‘As safe as fertiliser’

We already highlighted the wonderful technology of wood fibrils in a previous article. Researchers now succeeded in producing chips of which the support consists of CNF, cellulose nanofibril, a material that is perfectly biodegradable. In a typical semiconductor electronic chip, the active region comprises the top thin layer and is only a small portion of the chip, whereas more than 99% of the semiconductor materials are in the support. And in microwave chips for wireless functions, only a tiny fraction of the lateral chip area is used for the required active transistors/diodes, the rest being used only for carrying other non-active components. Therefore, a chip with wood fibrils as its support might reduce environmental pollution from discarded consumer electronics by more than 99%.

On average, cell phones are used for less than 18 months and computers are used for less than 3 years before being replaced. For the US, researchers estimate that in 2007, over 426,000 cell phones (most of them still functional) and 112,000 computers were discarded every day, totalling 3.2 million tons of electronic waste per year. Our view on this could be altered radically by the discovery of a research team, led by professor Zhenqiang ‘Jack’ Ma of University of Wisconsin-Madison. Their paper, published in the journal Nature Communications, describes the new device based on CNF. They proved that CNF has the electronic properties required for the support. ‘The majority of material in a chip is support. We only use less than a couple of micrometres for everything else,’ Ma says. ‘Now the chips are so safe you can put them in the forest and fungus will degrade it. They become as safe as fertiliser.’ Although, we comment, the remaining 1% of semiconductor materials might still prove to be a good reason for proper recycling.

The group addressed two key barriers to using wood-derived materials in an electronics setting: surface smoothness and thermal expansion. Wood is a natural hygroscopic material and could attract moisture from the air and expand. But an epoxy coating on the surface of the CNF solved both the surface smoothness and the moisture barrier. The biodegradability of these materials could have a positive impact on the environment, but Ma says that widespread adoption of these electronic chips might be caused by the flexibility of the technology. ‘Mass-producing current semiconductor chips is so cheap, and it may take time for the industry to adapt to our design,’ he says. ‘But flexible electronics are the future, and we think we’re going to be well ahead of the curve.’

If we take a somewhat broader view, this discovery might have an impact on views on the circular economy. So far, leading theorists of the circular economy have rather underestimated the importance of the biological cycle (because of the biodegradability of materials), and put all emphasis of the technical cycle (industrial recycling). If even the heart of electronics, the chip, would become accessible to the biological cycle, the circular and biobased economies could grow closer, to the benefit of sustainable electronics.