Today and tomorrow is Global Divestment Day, the day when concerned citizens around the world ask institutional investors like universities and pension funds to withdraw their investments from fossil fuel companies. Because, as gofossilfree.org puts it, ‘as governments fail to take bold action to confront the climate crisis and fossil fuel expansion continues at an ever increasing pace, it’s time for us to take matters into our own hands.’ 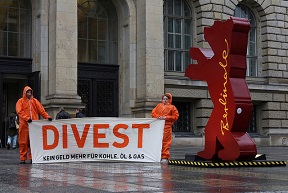 Not just the right thing

Institutional investors, the site estimates, have about $ 400 billion worth of shares in fossil fuel companies. The value of those companies is not just related to the amount of fossil fuels they pump or mine, it is also an appreciation of the reserves they still have below the surface. And the International Energy Agency IEA estimates that 80% of those reserves will have to remain below the surface in order to restrict global warming to 2 degrees. Recognition of that fact would appreciably lower the value of fossil fuel companies at the stock market. It might not just be the right thing to do, a divestment from these companies, but an economically sound investment policy too.

At least Royal Dutch Shell is getting to feel the heat. Their CEO, Ben van Beurden, went public in the last months, telling one the one hand that oil companies should take seriously the climate problem (and substitute natural gas for coal), but on the other hand also that divestment would not hurt Shell: the company would always be able to attract new investors. But if institutional investors would withdraw just 1% of their capital from fossil fuel companies and invest those funds in renewable energy, these $ 4 billion would amount to a major boost in this field. A major step on the road to the final victory of renewable over fossil. At least in our opinion, solar cell prices are so low already, and so many innovations in this field are still underway, that there can only be one outcome of this battle: solar will win, even though the conflict might be prolonged and even though there may always remain some market for fossil fuels. 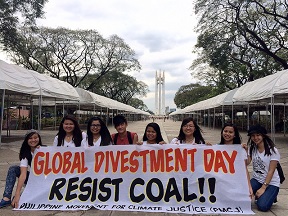 On World Divestment Day, activists put all this on the agenda. They request institutional leaders to ‘immediately freeze any new investment in fossil fuel companies, and divest from direct ownership and any commingled funds that include fossil fuel public equities and corporate bonds within 5 years.’ And they request the fossil fuel companies ‘to stop exploring for new hydrocarbons, to stop lobbying in Washington and other world capitals to preserve their special breaks, and most importantly, to pledge to keep 80% of their current reserves underground forever.’

World Divestment Day shows many actions, of a great variety, around the world. In Australia for instance, where the Great Barrier Reef is under threat because of the proposal to construct a new coal harbour at its edge, there were manifestations in Canberra, Adelaide and Sydney. In Europe Berlin, Uppsala, Luxembourg, The Hague and others followed suit. Johannesburg and Toronto also participated. And it was not just in industrialised countries that protesters marched the streets. There were also rallies in Ho Chi Minh City, Vanuatu and Manila. World Divestment Day is a committed request to responsible investors to act responsibly.

Perhaps the stone age ended because tribal leaders started to invest in metals.