We are right in the middle of the most radical transition that our society can go through: that of a centralistic, fossil-fuelled society to a much more decentralised society mainly on the basis of local resources. Different observers, dependent on their views, would call this transition by different names like circular economy, biobased society, sustainable energy – all these aspects being part of that transition. Conflicts, and clashes of interests will be an integral part of this society for many years to come. Says Derk Loorbach, director of DRIFT (Dutch Research Institute For Transitions) in Rotterdam.

Government is part of the reigning ‘regime’
Derk held a lecture at a discussion meeting on ‘bioenergy versus green chemistry’ organised by IMI (Institute for Societal Innovation). Always, transitions are radical processes with much conflict, he said. And no doubt, that will hold true for the present transition as well. For the time being, the centralised model is dominant (the ‘regime’). Government is part of that. Look at energy policy: the Shell model is the model of government policy. Along inimitable lines of thought, large-scale solutions keep popping up. As a clear example: the need for reducing CO2 emissions has been translated to a target of more energy production without CO2 emissions, ending up in large-scale co-firing of wood pellets in coal-fired power stations, actually a form to perpetuate coal use. 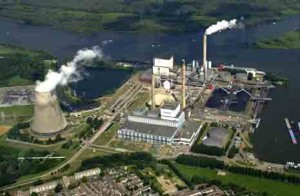 Somehow, the system always comes up with large-scale solutions

One of the forms in which the regime tries to consolidate and stabilise itself, according to Derk Loorbach, is innovation policy. Dutch top sector policy is an attempt to stay in control at a central level of the development of sustainable technologies. Incumbent interests are dominant in this structure, and they steer in the direction of large-scale solutions. Even though society clearly needs decentralised innovation. But this development is slowed down by perverse stimuli in the system (such as spending much money on non-innovative wood pellets). These are the real problem. The regime tries to compensate for those perverse stimuli with innovation subsidies, but in doing so just strengthens the lock-in, society being locked in dominant technologies and existing infrastructure. We would need to have destruction policies instead of innovation policies.

Tensions lead to opportunities
And yet, Derk Loorbach radiates an indestructible optimism. History teaches us, he says, that opportunities for transitions grow as the lock-in strengthens. And obviously, sustainable energy and green chemistry represent pathways out of the crisis. How then, will we prepare ourselves for the coming breakthrough? Increasing tensions, Derk says, offer more opportunities. They create the willingness and space for structural changes. Some incumbent energy companies change their ‘story lines’. Some regime parties start to want to be part of the movement toward change. At the same time, the opposite movement also happens: outsiders are drawn into the regime by extension of the ‘polder’. All of this is part of the still deepening conflict in this ‘mother of all transitions’.

Meanwhile, there is a lot of dynamics outside the system, at places where the existing fossil regime is not dominant. Driven by richer perspectives than the dominant story lines ‘things are getting worse’ and ‘the world is going down the drain’. The seeds of the new world are sown at many places. All over society, people look for new perspectives, the seed of change is sown everywhere. We will witness a  breakthrough. We just do not know when, and how.