You are here: Home / 2013 / April / Old leftist demons in the perception of sustainability

Old patterns are pervasive in the perception of sustainability. Motor car journalists do not like the Toyota Prius, not because it would be a bad car, but because it has been introduced in the market on the basis of its energy efficiency; that reminds them of the anti motor car activists of the seventies, and they dislike them. Those were the people who preached a better world and reproached others, they felt superior. That is why. 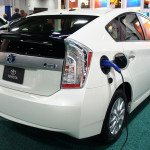 Old images of sustainability
The seventies haunt us. Robert and Edward Skidelsky, father and son, economist and philosopher, wrote an excellent book ‘How much is enough?’ They argue that permanent economic growth is a logical impossibility; we should therefore conceive a society that is no longer dependent on growth. A theme that would fit nicely in the concept of sustainability, one would be tempted to think. But the Skidelsky’s explicitly distance themselves from that line of thinking. They judge the ‘environmental movement’ (a term that belongs to the seventies) to be too negativistic, and do not want to be associated with it.

This week I was correcting a text on sustainability, and came across a passage that took exception on the ‘planning’ side of sustainability. I nearly missed it. But on re-reading, alarm bells started to ring. In what way would sustainability need to be ‘planned’? All sustainability initiatives I know are spontaneous; all attempts to control them are desperate failures. How could a politically conscious person link sustainability to planning? The answer is: merely by association with the seventies. It is true: most of the activists of the seventies belonged to the political left. And then, the left was in favour of planning. But times have changed.

‘Business as usual’ is no longer what it used to be
In the minds of many people, there is something like ‘business as usual’ that functions automatically and does not require much policy effort; and on the other hand we are supposed to find the proponents of sustainability, who are in favour of ‘something else’, which would require major policy efforts. But in practice, government is permanently in the business of intervening for business as usual. Fossil energy is heavily subsidized, in particular through tax credits for oil companies; the same which profit much from innovation subsidies. And bizarrely, government has never intervened as heavily as it does now in the health care sector, for the sake of promoting ‘the market’. Never were there so many spontaneous sustainable initiatives in the health care sector (local, practical, hands-on), that were suppressed so hard.