Shale gas is not a threat, it is an opportunity. The whole world will benefit from US coal fired power stations to shift to natural gas, thereby appreciably reducing their CO2 emissions. And Europe should act appropriately in return: by decoupling gas prices from oil prices, and make headway in its own direction, the biobased economy. 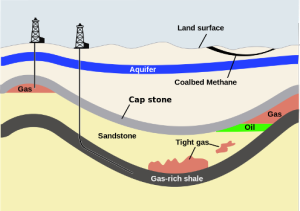 The US do not go all out for shale gas. They also maintain major programs for solar and wind energy, and for second generation biofuels. Then, which opportunities does Europe have? If we are going to import cheap coal from the US for our power stations, that might be an adequate answer for the time being, and we will profit somewhat on the financial side – but it does not resolve our CO2 problem. How can we find a positive answer within the framework of the market economy? Right now, EU gas prices are rather high compared to US gas prices, as in the EU the gas price is still coupled to the oil price. In my opinion, we should decouple these prices as quickly as possible. I presume that the gas selling countries, in particular Russia and in a later stage the area around the Caspian Sea, would react by lowering their gas prices, in order to frustrate a possible development of European shale gas, and also in order to stay competitive with coal in Europe. Given the situation that one has a lot of gas, and the infrastructure being almost finished, substitution of coal is an easy way to sell more gas, i.e. natural gas in this case!

Europe should concentrate on specialties
The developments in American chemical industry on the basis of shale gas simply confirm a trend from the seventies onwards, when in the Middle East cheap feedstock was used for chemical industries. The surprise is that development and expansion now take place in the US, but if the Americans would not have developed shale gas, a similar expansion of chemical industry would have occurred elsewhere in the world. The demand for ethylene keeps growing almost twice as fast as world economy, i.e. at 3 to 4% annually. That boils down to an additional ethylene capacity of 4 to 5 million tons per year, again and again. The announced US ethylene crackers will not really destabilize the balance of supply and demand in the world.

European chemical industry will not grow much in ethylene volume in the next few years. But opportunities will keep coming up in specialties, and Europe should make use of them. In particular, it should valorize to the maximum the opportunities from further specialization in fossil chemistry, and from the biobased economy. On the basis of the right vision, chemical industry might reap a lot of benefits in Europe and stay a vibrant industry in – we sometimes seem to forget – the largest trading block in the world, Europe. For Europe, that implies that we will have to remain the frontrunner in producing chemical products with the lowest CO2 footprint, and the highest possible value.