You are here: Home / 2012 / November / Certification is of the essence in the biobased economy 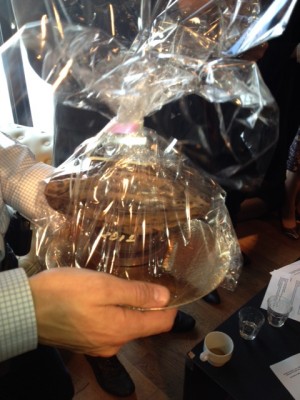 Certification. That was the common denominator in many contributions to the discussion in my group at the ‘Social aspects of bio-based chemicals’ meeting in Amsterdam, Friday 2 November. And cooperation. And the ambition to excel. The question was, what my country, the Netherlands, could contribute to the biobased economy. Well, there it was: ambition to excel, with an open mind, aimed at a success in developing certification, in cooperation between many parties.

Everyone needs certification. NGOs need it because in this way, they can realize their goals, step by step (and for some, awkwardly slow). And companies need it, because certification specifies their targets. In principle, certification of biobased resources covers all areas which could go wrong, from cultivation and harvest to transport and processing. Many certification schemes (e.g. concerning palm oil) stress environmental and climate effects. Many NGOs feel that social aspects are not included well enough in the criteria. At the same time there is a general feeling that much has been achieved in ten year’s time. Even though at present and in general, chemical industry cannot look back in the chain down to the primary supplier of the feedstock – certification covers an ever increasing part of that chain. The organizers expressed their gratitude to the speakers at the meeting with a large egg made of certified chocolate, another area with good progress. And an alternative to certification? There is none.

Subsequently, responsibly produced materials and products will have to be bought by the consumer. Even though there is an unpredictable element in consumer behaviour, major retailers have many opportunities to promote certain products. Therefore, certification should be matched with covenants between producers, NGOs and retail, targeted at promotion of responsible products.

Moving targets
Participants advised: do not try to accomplish all goals at the same time. Even if we agree (for example) that co-firing wood chips in coal-fired power stations is a poor way of compliance with CO2 regulation – the Netherlands do not have many other options (after having failed blatantly in solar and wind energy at an earlier stage). But we could agree on a moving target, changing to a more ambitious level each year. For instance in terms of value addition, meaning moving into the higher brackets of the value pyramid. Why not include the value pyramid in certification, under the provision that results on this scale will have to improve each year? Industry quite often uses moving targets as a management tool. Make use of the fact that we have not yet moved into take-off zone on the learning curve, as one of the speakers proposed.

One of the participants in my group often receives groups of young people at his site. They are amazed at the lack of sustainability in our production system. That amazement should, in twenty years’ time, when they have moved to decision making positions, propel the world.