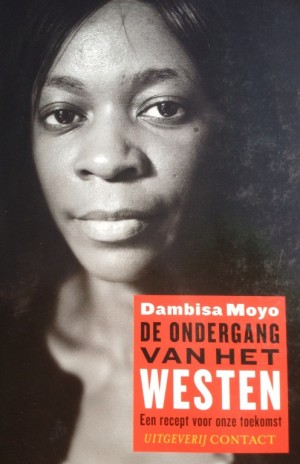 ‘Everyone should read this book’ is a thought which does not come up often. But it did come up with me as I read ‘How the West was lost’ by Dambisa Moyo, a Zambian economist who worked for Goldman Sachs and the World Bank. Dambisa spells out how we, in the West, have spiralled downwards until we hit the ground. The US and Europe almost collapse under the weight of government, corporate and consumer debts, a weight which we ourselves have allowed to amass, and which we hardly try to alleviate, acting as people of private means.

So that is how Greece will go bankrupt, and how in the US some local authorities have filed their petition in bankruptcy because they cannot pay their public workers’ pensions any more. How did we come this far? ‘We did it together’, says Dambisa. ‘We went on consuming, and did not pay attention to the amount of money earned.’ That holds for everyone, in particular of course for Americans, who bought houses which in fact they could not pay, and therefore paid the grocery store with some of their many credit cards. Writing it down plainly like this makes it hard to believe that this was how things actually went. Dambisa explains it all clearly, being a top economist who watched capital. That is hardly a reason to recommend this book, for so did others, and sometimes better.

The technology factor
But Dambisa pays attention, too, to the labour production factor, and to the third factor which some call technology, and others Total Factor Productivity (TPF). She has valid remarks about both. In the field of labour, for instance, she outlines that the image of what a person should contribute to society, changed completely after the war. Adolescents aspire to be sport, pop or film stars, or would like to be banker, hedge fund manager or CEO in later life, functions which do not contribute much to society, as she puts it nicely. A negligible number of youths actually acquire these posts, and those who fail, loose years of education. Technology is not glamorous and therefore youths do not study it, whereas we dearly need technicians in order to secure our knowledge position, the last area where Europe is still in the lead. And that is how we loose ever more ground to the Rest, like Dambisa calls them, where people, companies and governments strive to overtake us.

That is a conclusion I do not share. But first the end of this thriller, as Dambisa Moyo sees it. We should take a much tougher stand on both BRIC countries and the Rest (‘we’ being the US and Europe, which by the way hardly figures in the book). In her view, the best the US could do, is go bankrupt, and let the whole world clean up the mess together. Surely an interesting thought, but Americans would be humiliated in its execution.

I leave that as it is, chaos all around, and concentrate on the technology factor. Unfortunately, the author is not an expert in this field. She has high hopes of shale gas to secure America’s energy future. But the ‘green economy’ and the development of a ‘green technology’ are clearly out of her scope. She mentions them and dismisses them right away. I feel however that this green technology will be our rescue and our safeguard for future wealth. It is the only factor – with some biomedical research – upon which we can build a new society: knowledge and technology for our industry, employment in a new green branch of the economy, and a new knowledge base upon which we can start again to conquer the world and make a difference with the Rest.