Having been the owner of a little house in the French campagne, visited each year, I had not been in the mountains for some twenty years. But finally we went there. Somewhere in the French Alps, near Morzine, we were going to roam the mountains; sturdy shoes and a rucksack belonged to the outfit. As soon as we were there, it dawned upon us that we belonged to a species soon extinct. It’s just the elderly who do this.

Youths ride the bike. They certainly do! Fitted with a robot integral helmet – with the camera to record their cool, daredevil descents – and completely armoured, they dash down skiing slopes, alp meadows and woods, scaring stiff innocent pedestrians. But whereas we, aged mountain wanderers, belong to a vanishing species, uninteresting to them, it has a disastrous effect on nature. Having completed their descent, they mount the ski lift (fitted with bicycle carriers nowadays), and start all over again. Great for adolescents with adrenalin racing through their blood. Mind you: while skiers move on snow, these environmental criminals simply move top soil from the mountains. They are not in the tens, but in the thousands. And just for short-term gain of Morzinian shopkeepers, for clearly this cannot be sustained for decades.

Let us go to Morzine, we thought one rather clouded day – the other days were magnificent – and have lunch. The village was crowded with them. They were everywhere, speeding on their way to the next lift to do it again. All to the benefit of the local merchants and lift owners. Down there, it seemed to me to be a nice and sporty activity – till I saw the devastation uphill. To me, skiing with its lifts and wonderfully balanced equipment, is a highly technological activity; but this was more extreme. As if American football players performed their sport at a 45 degree slope.

These guys, and the odd girl, had the time of their lives. And clearly, they did not care at all about nature conservation, circular loops, and the green economy. The skiing settlements found a new source of income, as long as it lasts, provided that they keep the lifts operating during the summer. For walking uphill, that does not appeal to these robots on wheels. 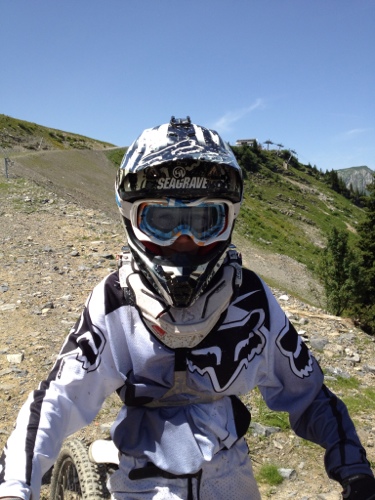 Robot biker on a devastated mountain