How do we get rid of the growing amount of plastic waste in the world? On a macro scale, The Ocean Cleanup tries to accomplish that: by removing plastic from the oceans. But we will also have to try to prevent new plastic material from polluting the environment. By using less plastics? We reported earlier already on microorganisms that remove plastic waste. We increasingly discover such plastic eating organisms. But as yet, no process is being used on an industrial scale. 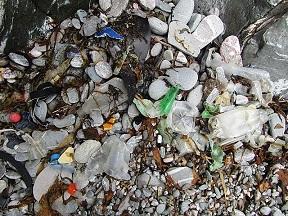 Plastic eating organisms: the larvae of the honeycomb moth

One of the most common, and most stable plastics globally is polyethylene (PE). It does decompose in nature, but it doesn’t degrade. The small ambient particles in nature still consist of polyethylene; because they are so small, they can traverse biological barriers, with unknown consequences. But a few years ago researchers discovered the waxworm, the larva of the honeycomb moth, that appears to love polyethylene. Even more so: it is one of more than 50 species of ‘plastivores’ — mainly bacteria and fungi — that can consume and metabolize polyethylene.

The honeycomb moth (official name Galleria mellonella) is a parasite common to beehives. The moths lay their eggs in the hive and the larvae feed on the wax of honeycombs. An Italian beekeeper accidentally discovered that the larvae are also plastic eating organisms: they eat polyethylene. This led to research on the fate of the plastic – and on the speed at which this process might lead to reduction of the massive amount of plastic that mankind produces annually. 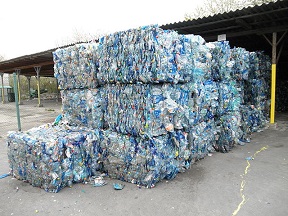 PET can easily be recycled, if it is collected. Bales of PET bottles. Photo: Michal Manas, Wikimedia Commons.

Enzymes that break down PET

We discover ever more examples of such processes. For instance, in a graveyard German researchers found an enzyme that breaks down the plastic PET. A good location to find yeasts and bacteria that break down natural polyesters. In an experiment, this enzyme took care of the breakdown of 90% of the PET within 16 hours. A record, so far. Japanese scientists made a similar discovery, reported by Forbes Magazine.  And at the University of Texas, researchers used artificial intelligence (AI) to speed up the process. The computational work finally came up with an enzyme that can turn PET waste into a useful material, within 24 hours.

And then, researchers of the University of Portsmouth re-engineered their ‘PETase’ to create an enzyme cocktail that can digest plastic up to six times faster than normal, so they claim. But although the discovery offers hope in the fight against mounting plastic, researchers caution that we are still years away from widespread commercial use. Moreover: we discover enzymes that eat just one kind of plastic, whereas there is a vast number of plastics out there that we cannot yet handle. 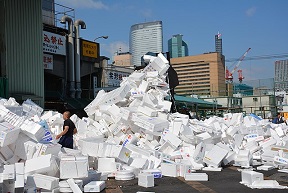 However, such processes also carry risks with them. For example, plastic eating bacteria may produce toxins as a result of their activity. These might do more harm to the environment than the plastic waste itself. It will require elaborate testing before we are going to use such processes. Moreover, will we then recover the substances produced? This will require time and cost. Is the process fast enough? Will the products recovered from plastic eating organisms be pure enough for further processing? Will the entire process be cost effective, when compared to the use of other plastics, or of no plastics at all?

Another persistent plastic that might in the end be broken down is polystyrene (PS). Australian researchers cultivated worms that eat polystyrene (PS). They carry plastic eating organisms (bacteria) in their intestinal tracts. The problem being that the worms are quite slow in eating the plastic; therefore the researchers came up with a new idea. They intend to make artificial ‘intestines’ that will be fed with PS. But right now, this is still in the phase of development.

So far, we just looked into plastics that we need to process in order to prevent them from littering the environment. There are also plastics that degrade all by themselves. Like the plastic material developed by Notpla, made of seaweed. It can be reused; but if discarded into the environment, it will disappear within a few weeks, just like most natural materials.

Or alternatively we might look into upcycling the plastic. And lo and behold, such processes are in development. Even several of them. For instance, researchers at the University of Edinburgh use the common bacterium E.coli for the production of vanillin from plastics. Although using this particular pathway could be difficult – the product would have to be completely safe to consume.

And there are more upcycling processes in development. Researchers at the National Renewable Energy Laboratory in Colorado are looking into the common soil bacterium Pseudomonas putida that can do this. They use this bacterium to process PET into a kind of nylon. Part of the BOTTLE research partnership, intended to solve plastics issues of today and design better recyclable plastics for the future.

In this process, as reported by Grist, the idea is to turn plastic waste into higher-value materials. First, the team breaks down PET into its monomers. Then they feed these to specially engineered bacteria, P. putida, which produce β-ketoadipic acid that can be used to make a type of nylon that’s superior to what’s widely used today. ‘This is the idea behind plastics upcycling,’ says Alli Werner, the project leader, ‘turning waste into higher-value materials so that reclaiming plastics can be profitable.’ That could provide an incentive to adopt the process at a far larger scale. But first they still have to assess the process’s viability and cost-effectiveness.

In short, a lot is going on in the field of reclaiming and upcycling plastics. Strangely enough however, nowhere we ran into the following issue. Plastics were designed to last almost forever. That was the whole point in making and selling them. If they can be broken down by organisms and  enzymes developed by us – what will be the future of plastic?