You are here: Home / 2022 / June / The continuing struggle to control weeds

An article in Chemical and Engineering News calls our attention to the struggle to control weeds. Will we be able to control weeds in the future? Will the EU, that wishes to halve the use of agricultural chemicals, come to our rescue? The major upheaval in the Dutch agrosector testifies to the topicality of the subject. 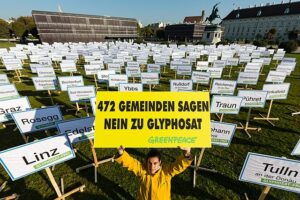 Glyphosate is one of the weed killers that has run into much resistance. Greenpeace demonstration against glyphosate, Vienna 2 October 2017. Photo Arquus, Wikimedia Commons.

Since early 20th century, chemists developed many weed killers. But with just a limited (25) number of weed-killing mechanisms. Many substances are variations on a theme. The heydays of weed killer development were between 1950 and 1980. Then, the vast majority of the mechanisms now applied, were discovered. There was much optimism on our ability to control weeds. But then we ran into resistance: the phenomenon that some weeds develop survival mechanisms; vastly reducing the effectiveness of the weed killers.

This problem aggravated because all of a sudden, the pace of weed killer development came to a halt. Since the 1980s, just one herbicide with a new weed-killing mechanism has been introduced on the market. Now crop protection companies increase R&D efforts again to discover new modes of action to control weeds. But even if industry finds new families of weed killers, one lesson of the past decades remains: we urgently need to reduce the use of herbicides on the land. Lest we should discover that resistance will keep on developing. The further development of biostimulants might be a better policy. 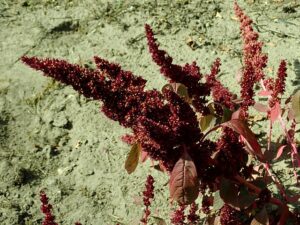 Even Roundup loses the battle

One of the weed killers that fall short of their past promises nowadays is glyphosate; originally sold under the name Roundup by Monsanto. Originally, this was a most effective substance to control weeds. But in the course of time, resistance popped up. On cotton plantations in the US for instance, they have a lot of trouble now with a Roundup resistant amaranth, a kind of vegetable. It grows very fast and then prevents sunlight to get through to the cotton plants. What to do? Use more weed killer? Apply another toxin to control the weed, setting in motion the development of more resistance in the course of time? More than 50 plants over the world have now developed resistance towards glyphosate.

Nevertheless, the herbicide industry steps up research. Hoping that new tools, such as inspiration from human drugs, artificial intelligence and DNA-encoded libraries, will help them to find new agents. But increased regulatory costs and industry consolidation work against such a movement. For instance, regulation-related costs for a new herbicide more than doubled between 1995 and 2014. And mergers between herbicide companies will reduce the number of new substances researched, as labs will be merged.

But there is still a lot that we could research, CEN tells us. Whereas we now know 25 modes of action of herbicides, research indicates that there are some 230 enzymes critical for plant survival. Blocking any of these of these might in the end give rise to an effective herbicide. Although researchers should take care of factors like environmental safety, possible harm to humans, and price. Moreover, the idea that we might effectively control weeds by using a single compound, quickly loses its credibility. Here, as in the medical profession, combination therapy is gaining ground rapidly.

And new herbicides seem to arrive, as a matter of fact. Cyclopyrimorate, developed by Mitsui Chemicals, is the only commercial herbicide with a new mode of action since the 1980s. Cyclopyrimorate bleaches and ultimately kills weeds in rice paddies by inhibiting an enzymatic pathway that produces plastoquinone, a molecule needed for photosynthesis. And FMC hopes to launch tetflupyrolimet in 2023 or 2024, another rice paddy herbicide on which they worked for over 10 years. This substance inhibits an enzyme that is part of the pathway producing pyrimidine, a nucleotide precursor that is critical for plant growth.

A quite different line of investigation is to start with natural products. These will generally be more difficult to handle. But, as Franck Dayan of Colorado State University says to CEN, this field has been little researched, so there might be positive surprises ahead. Or explore entirely new modes of action. Oerth Bio looks for inspiration in humane cancer research. It aims to flag target proteins to be destroyed by a cell’s proteolysis system. And the start-up Projini Agchem tries to find herbicides that kill plants by disrupting interactions between proteins.

But even if we should find new herbicides, we may to revert to old mechanisms as well. Like planting rows of crops close together, creating a shady canopy to slow down weed growth; or adjusting the timing of planting to reduce competition with weeds. Or till the soil again, to a certain extent. This is likely to be more cumbersome and costlier than just applying more herbicide. But then, we should wish to preserve the agricultural function of land. Farmers will often wish to hand over fertile land to their children and grandchildren. Then, we might need such practices; just for continuation of that lofty task of agriculture: to feed the world. Another possibility is to pay more for our food, if we should wish to operate nature friendly. In fact, we already do so through EU subsidies for agriculture (from the taxpayers’ money). But it might become a lot easier if we should skip all subsidies and pay the real costs to the farmers. Including a reward for their efforts to sustain nature and biodiversity.