Until quite recently, lithium-ion batteries were supposed to be the pinnacle of battery technology. These devices would allow the electrification of transport, and indeed of much of the entire world. But they have now got competition from sodium-ion batteries. Not yet commercially available, but very promising. 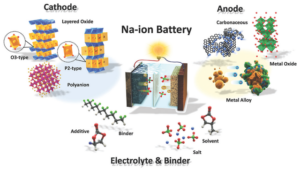 Chemical and Engineering News reports that the case for lithium-ion over sodium-ion batteries isn’t so solid anymore. Yes, technologists discover new improvements of lithium-ion batteries almost daily. Gigafactories for production of these batteries appear with increasing frequency. But lithium-ion has one major problem: its price. At the present pace of development, lithium prices will probably stay high. Moreover, about 90% of the world’s supply of lithium is controlled by Chinese companies.

Therefore, sodium-ion batteries, long supposed to be only second best, gain attention. Especially from Western companies seeking a secure supply chain for battery materials. The Achilles’ heel of sodium-ion batteries is that they can store only about two-thirds of the energy of Li-ion batteries of equivalent size. Developers of Na-ion batteries say they are steadily increasing the energy density of their prototypes. None are commercial yet, but serious competition for lithium could soon be on the way.

In 2019, lithium hydroxide cost $ 6,000 per metric ton, says CENews. Now it is $ 78,032. Compare the price of sodium hydroxide, stable below $ 800 per ton. It is in ample supply, as it is being produced as a side product to chlorine (by electrolysis of sodium chloride, common salt). But will the price difference be enough to ensure the future of the sodium-ion battery?

Present-day sodium-ion batteries have an energy density of about 160 W h/kg, similar to that of older lithium-ion batteries. (Modern lithium-ion batteries attain 230 W h/kg or a bit more). At this power density, batteries generally don’t need cooling, which may be an advantage. Faradion, one of the developers of sodium-ion batteries, says that their product is still improving fast. They expect their batteries to reach an energy density level of 190 W h/kg in the next few years. Still, forecasters foresee just moderate levels of substitution. This year, Faradion was bought by the Indian company Reliance Industries. They plan to build a Na-ion battery factory in Jamnagar, India, for applications such as slower electric vehicles, like rickshaws, and stationary power storage.

Another company in the business of sodium-ion batteries is the California-based start-up Natron Energy. Their battery has a lower energy density, about 70 W h/kg. Comparable to that of lead-acid batteries. But they too target important markets. Their batteries have the unique characteristic of being able to deliver huge amounts of power over short durations. They are suitable as auxiliary power for industrial applications, for instance data centres. And there is Altris, a Swedish company that intends to construct a commercial sodium-ion battery plant soon.

In short, sodium-ion batteries are starting to move from pilot- to commercial-scale production. The supply chain issues with lithium opened up the window of opportunity for them. ‘What a time it is to be a battery chemist,’ says Jerry Barker, founder of Faradion, to CENews.

Interesting? Then also read:
Energy storage, its role in the transition
Battery technology in fast development
Integration of PV into the economy