The ‘70s of the past century mark a turning point in the control of toxic microorganisms. Researchers then discover that we will never finally be able to control them. That we will always find resistance on our path; and that therefore the search for new medicines will never end. We have become part of the evolutionary arms race that is so characteristic of nature as such. We (re)discover our finiteness as living creatures. 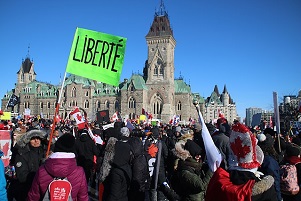 ‘A form of rebelliousness comes up when people are confronted with the vulnerability of their existence, for instance during the Covid pandemic.’ Convoi de la liberté, Quebec, Canada. Wikimedia Commons.

A hyper individualism has taken hold of our society. People look upon themselves as individuals first and foremost, rather than as a member of a group. Even a narcissistic individualism is on the rise: the self-image of people who are fond of themselves. See the cult of embellishing the body, for instance in the form of tattoos. A manifestation of this hyper individualism is that death is no longer an accepted phenomenon. It is being expelled from everyday life. People even hardly accept illness nowadays. A form of rebelliousness comes up when people are confronted with the vulnerability of their existence, for instance during the Covid pandemic. Even though people don’t often say it aloud, at times they ‘demand’ solutions for their finiteness, the vulnerability of their existence.

But this is an impossible demand. A tragic characteristic of life nowadays. For even though on the one hand people overvalue the individual existence nowadays; on the other hand people are aware of being a plaything of forces uncontrollable by them. Of microorganisms or vermin (hard to control). Of major companies and uncontrollable forces; of irresponsible politicians. Or of self-interest and money-grabbing (by others). People can no longer control the world; but if it comes to their own existence, it is often difficult for them to accept. This shows most clearly in healthcare. On the one hand many people would prefer to live long; but on the other hand healthcare is always short of funding, even in an affluent society. 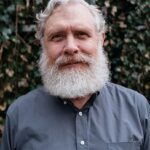 There is a movement that tries to escape from such tragic consequences: transhumanism. A movement that tries to stop our bodily decline by using science as a tool. In order to stop ageing and prolong life. An ideal that is being heavily funded by wealthy Americans. And renowned researchers step into this view; like the successful scientist and entrepreneur George Church. It is his aim to become 130 years old in the body of a 22-year old. But to what avail? Run once more the 100 meter dash within 12 seconds? Make a pass at the girls, once more? Make a career, again – as a builder, a researcher, a bank employee? Once upon a time, wisdom was looked upon as the perfect state of mind of the ageing citizen.

Ultimately, we cannot adhere to hyper individualism. It rests on the simultaneous adherence to two conflicting aims: that for a long, and that for a purposeful life. A purposeful life, in whatever definition, always has an end. A ‘solution’ for the inherent conflict can only be in the acceptance of the finiteness of life, and ultimately of the inevitable death. We will have to acknowledge that our power is limited. In other word: there are threats that we cannot in the end overcome: illnesses, plagues, conflicts. There will always be strife in our lives: conflict with each other, conflict with nature as such.

How does nature resolve such issues?

In nature, there exists a comparable tension. Here between the survival of the own species, and the survival of other species (ultimately: of nature as such). No species may be allowed to have a definite victory over others. At times the gazelle escapes the lion’s hunt, at times it is being captured and killed. The continued existence of both species can only been ensured if the hunt often ends one way or the other.

Therefore, from the point of view of an evolutionary arms race, it would be counterproductive if an antibiotic would kill all bacteria. Fortunately, nature’s wisdom does not lend us that favour. In nature, as in our own lives, the evolutionary arms race will always continue. Nature shows this, in her way. Researchers discovered that some ant species have overcome the problem of resistance to antibiotics – but at a price. 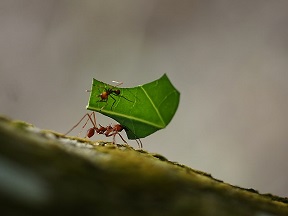 Ants of the Atta family, leaf-cutter ants from the Amazon basin, use bacteria that produce antibiotics to protect their nests against invading fungi and microbes. This species has done so for at least 15 million years. During that time, they found a solution for the problem of antibiotics resistance – whereas we have fallen victim to it. Our antibiotics live for 50 years at most; then we will have to come up with something new. What then is the ants’ trick? And can we learn from them?

Atta ants forage for vegetal material that they carry into their nests and feed to a fungus. This breaks down the vegetal material and the ants eat the fungus. The ants have difficulty digesting the plants, but the fungi have no difficulty in doing so, providing food to the ants. But sometimes, the nests come under attack of hostile bacteria and fungi. The ants have developed a defence against them, in the form of bacteria that they carry with them, visible as white dots on their bodies. These bacteria produce strong antibacterial and antifungal compounds. In sum, nests are characterized by a threefold interdependence of ants, fungi and bacteria.

There is something special about the antibiotics in the ants’ nests. They don’t exist of a single compound, but of a series of closely related molecules. Could this be an effective weapon against resistance towards antibiotics? Yes, so it seems. But this also implies that the bacteria will have to develop new variants of these antibiotics all the time. Here we stumble again into the evolutionary arms race with their microbial enemies. In order to prevent resistance from developing in the hostile organism, the tripartite consortium continuously develops new antibiotics from its inventory of closely related molecules. We might draw the consequence to follow the same evolutionary strategy for the proper functioning of our medicines. Always treat the disease with a cocktail; and take care of this being in continuous development.

But the ants also have a trick on their sleeves that we cannot perform. We use antibiotics in order to kill the microorganisms. The ants use them in order to keep under control their enemies. Therefore, the outcome isn’t always an outright victory. Researchers also come across nests that have lost the battle against the intruders. A ‘solution’ that is not acceptable from a human point of view. We will always try to have the upper hand. Even though we know on beforehand that we will not always be successful.

There are fights that we cannot win. For instance because the ‘victory’ would come with an unaffordable price. The fight against fungi in our bodies (episode 64, Fungal infections) is a clear example. Over-the-top research into the postponement of the inevitable death. We don’t escape from the evolutionary arms race either. It marks the finiteness of our existence. But we don’t have an alternative.