Many proponents of sustainability adhere to the idea that the main path to sustainability lies in high-tech solutions. Like electric cars instead of the old ones, that guzzle fossil fuels. We even wrote a book on this ‘green growth’. But we also need to look at low-tech and its opportunities.

The Conversation recently ran an article on low-tech and sustainability, by Chris McMahon. There are two lines of argument for low-tech: material and spiritual. On the material side, McMahon argues, high-tech is likely to produce future resource shortages. The argument from the Limits to Growth report, but in a new dress. And it’s true: many modern devices contain materials that can become scarce. Devices like cell phones, television and motors. Their increasing production uses a lot of materials like copper, cobalt, lithium and rare earth elements. Not only is the supply of these elements finite, but we need large amounts of energy for their extraction and processing; and these energy requirements again make a demand on resources.

Maybe even more problematic is that many of these devices are inherently difficult to recycle. Most devices are not designed with an eye on recycling. The overriding interest in their design is their functionality. This will often result in the use of many different materials and elements. Cell phones can contain up to 30 different elements, most of them in small quantities. Even with very good recycling technologies, recovery of these elements from cell phones will be very difficult (and expensive). And with a growing economy, chances are that we will need more of these elements all the time. Not to mention the problem of pollution, another problem that we haven’t got under control. Neither in the oceans, nor in the atmosphere. Is this where high-tech is taking us? 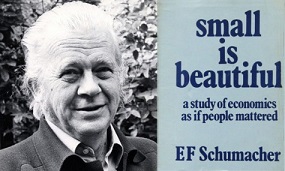 The alternatives to economic growth often stress simplicity and durability, local manufacture, and traditional or ancient techniques. With a new appreciation of conviviality and social connections. Not necessarily meaning a return to pre-industrial ways of living, but with more awareness of the importance of the quality of life. Such an approach will remind the older readers of the British economist E.F. Schumacher. His 1973 book Small is Beautiful contained not just a critique of modern technology. He also advocated simplicity, making use of locally affordable, efficient (so-called ‘intermediate’) technologies.

One of the modern proponents of this philosophy is the French engineer Philippe Bihouix. His book The Age of Low Tech, published in 2014, describes what life in a low-tech world might be like, including radically cutting consumption. It was reviewed on the sites resilience.org and climateforesight.eu. Bihouix criticizes modern society for its ‘techno-solutionism’. The idea that more technology would solve our problems. He doesn’t believe that we really solve problems with the same processes that caused by the rise of industry. Many of the negative side effects of ‘progress’ are hidden from the eyes of Westerners. Immense data centres, low-paid labour in the textile industry, giant mines. Even renewable energy technologies require a lot of non-renewable resources like rare earth metals.

Instead, Bihouix proposes that we should make use of low-tech solutions. Following three guidelines.
– Make recycling easy: design products with an eye on their afterlife
– Make products more robust and repairable: move away from the once-through production system. For instance design computers in such a way that they can easily be taken apart as they stop working; the we might reuse bits of them. The archetypal low-tech device is the bicycle. Yes, it does evolve. But anyone can fix them, the core technology is low-tech.
– These two requirements need to be backed up by legislation. In order to standardize consumer goods and make them returnable. For instance, retreading the tyres of people’s cars instead of replacing them would cause a 160,000-ton decrease in tyre disposal.

Bihouix presents seven ‘commandments’ of the low-tech movement. Among others, we need to be cautious of automation (especially where employment is replaced by increased energy use). And in general, balance a technology’s performance with its environmental impact, reducing our demands on nature. Above all, we need to avoid excessive or frivolous consumption. We should rediscover the many simple, poetic, philosophical joys of a revitalised natural world.

Low-tech is getting support from more sides. McMahon mentions Belgian writer Kris De Dekker. His online Low-Tech Magazine has been cataloguing low-tech solutions, such as windmills that use friction to heat buildings, since 2007. And remarkably, the magazine explores obsolete technologies that could still contribute to a sustainable society. Like fruit walls used in the 1600s to create local, warm microclimates for growing Mediterranean fruits. McMahon also highlights the American architect and academic Julia Watson. Her book Lo-TEK (where TEK stands for Traditional Ecological Knowledge) explores traditional technologies; from using reeds as building materials to creating wetlands for wastewater treatment. This work is much like that of Gunter Pauli. He is a Belgian engineer who founded the company Ecover, the first company in the business of sustainable detergents. Now active as a sustainability consultant.

Meanwhile, says McMahon, in Japan there’s emerging interest in the reuse and recycling practices of the Edo period. ‘From 1603 to 1867, the country was effectively closed to the outside world, with very limited access to raw materials. Therefore, extensive reuse and repair – even of things such as broken pottery or utensils with holes that we’d now regard as waste – became a way of life. Specialist repairers would mend or recycle everything from paper lanterns and books to shoes, pans, umbrellas and candles.’

Resilience is the new progress

Reading about the low-tech approach, another feature is striking. Often, low-tech solutions are more resilient than high-tech ones. And that may be particularly important in the age of climate change. Read here the story of how low-tech farming can make African farmers climate resilient. Low-tech hasn’t died with Schumacher. His pupils still proclaim the message.

Want to get an idea about where your house is most vulnerable to heat loss? Volunteer to help a research project find out how heat is lost in homes. Drop us a message! #NetZero #Leiston #Suffolk #sustainability #community #GreenestCounty #NetZeroSuffolk #heatloss #thermalimaging pic.twitter.com/xhHTeMeOPL

There is still time to apply for our Board Member Vacancies! If you have skills in property & development, ICT or sustainability specialisms take a peek at this --> bit.ly/MVH-Board #BoardMember #Mutual #ICT #Sustainability #Development #housingjobswales pic.twitter.com/Dhv1axnhvG

lnkd.in/eTSpkN4H Honda has set itself a target of achieving carbon neutrality from all of its activities by 2050 #automotive #environmental #sustainability #hydrogen #fuelcells #powertrain @Honda @HondaEurope_PR

Making a difference, one event at a time! Be proud to organize a zero waste event, where we can minimize our environmental impact and promote sustainability. To READ MORE click the below link: eventneedz.com/blogPost/The-I… #zerowaste #ecofriendly #plasticfree #sustainability pic.twitter.com/jFnngnxeux