Seaweed is an attractive and relatively unknown source of food, feed and chemicals. Growing seaweed needs no land, and therefore it does not compete with other forms of food production. It does not require land based transport. Seaweed contains very little lignocellulose (the plant does not have to stand upright), and therefore contains a large proportion of valuable substances, mainly polysaccharides (up to 50%), and proteins (10-15% recoverable). 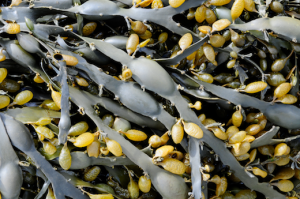 Seaweed as an addition to the diet
In Eastern Asia, there is much consumption of seaweed. People regard Nori (the red seaweed Porphyra) as a delicatessen, production is said to be over € 1 billion. Brown seaweed varieties Wakame and Kumbu are very popular, too. These seaweeds are grown in small-scale production units; weeds grow on lines and are harvested using small boats, according to traditional methods and low-tech. In potential, seaweeds could be a first-class addition to the diet, but in Europe consumption is mainly in the form of food additives. Seaweed products are much used in cosmetics. They are hardly deployed in industry, literature mentions applications in paint, glues, and paper production.

Valuable compounds extracted from seaweeds include alginates, agar and carrageenan, all polysaccharides. Alginate, for instance, is used in dentistry for moulds of the teeth. Agar is in use as a (vegetarian) gelatine. It is irreplaceable as the substrate for bacterial and fungal cultures. Carrageenan (E-number 407 or 407A) is used as a thickening and stabilizing agent in a great number of food products, e.g. chocolate milk. 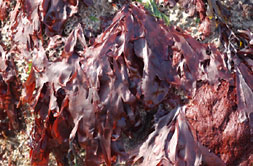 Combined seaweed and fish farms
In the EU, FP7 seaweed projects run as a part of the At-Sea and Mermaid programs, totalling about € 2 million p.a. Their products carry a value of € 1000 to € 3000 per ton. These include proteins, alginates, mannitol and food additives like fucoidan (a sulphur containing polysaccharide with anticarcinogenic properties), and fucoxanthine, which promotes the metabolism of fat. But there are limited markets for the latter products.

Seaweed production combines nicely with fish farms. Fishes excrete minerals, notably nitrogen, which are taken up by seaweeds. This scheme has the international acronym IMTA: Integrated Multi-Trophic Aquaculture. All around the world, people use or develop IMTA systems in the open sea, e.g. in China, Canada, Chile, Norway and Ireland. These open systems are very much dependent on local conditions like water temperature and indigenous seaweed species. Seaweeds release spores in the current, or propagate by division, which means that we will always have to use indigenous species in order to prevent ecological problems. Ideally, we would create a system with very little external effects, which can be fed by excess or side products from agriculture and the agricultural industry, or by waste water. Often, crustaceans are included in such a scheme, as they can absorb the organic fraction of fish excrements, whereas seaweed cannot. And in the ideal case, all components of the system can be ‘harvested’ and sold.

Synergy
Synergy is also in the joint use of facilities. Fish farming requires much labour, and if farms are combined, this can be spread across a number of ‘crops’. Commercial production of seaweed needs clear water, and on the North Sea (but not in Norwegian fjords) that would imply a long way from the shore. That in turn can only be a part of a good business case if the entrepreneurs build a hotel at sea.

One would be tempted to think that this could combine nicely with wind farms at sea. But companies operating wind farms usually are not very keen on a combination with seaweed production. For instance, there are a lot of cables on the sea floor in a wind farm, which need to be protected. And around the turbines, major surfaces need to be cleared permanently for maintenance. 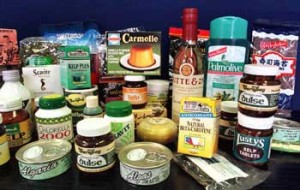 Food, feed and functionals
In the seaweed community, little thought has been given as yet to sales to industry, i.e. production of not just food and feed, but also of chemicals (functionals). Wageningen UR conducted a study on seaweed biorefinery in the past few years. Dutch Hortimare BV concentrates on seaweed reproduction and enrichment, and development of viable production systems at sea. Within a few years, it expects to market its first high-yield selections with higher protein content.

But the industrial news is from China. In October 2012, Xunshan Group, the largest producer of brown seaweed in the world, announced its cooperation with Bio Architecture Lab, an American biotechnological company, for production of biobased chemicals, biofuels and other high-value products from seaweed. ‘This agreement allows us to focus on our core strength — proprietary and patented technology — while leveraging the expertise and global reach of the Xunshan Group,’ said Daniel Trunfo, Bio Architecture Lab’s CEO. He expects that on the basis of their technology, global seaweed markets might increase from $ 5 billion to $ 250 billion.