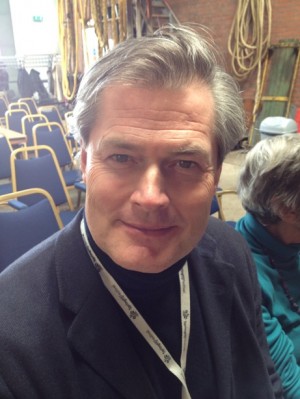 The interesting thing about festivals like Springtij at Terschelling is, that out of the blue you run into people with a completely new line of thinking. Someone like Gunter Pauli, who invented the ‘Blue Economy’ concept, because the ‘Green Economy’ is not as good and as fast moving forward as he thinks it should be.

Ever heard of Gunter Pauli or the Blue Economy? Neither did I, before he appeared as one of the key note speakers in the shed that housed the Springtij Festival. Who is Gunter Pauli, what is his Blue Economy concept, and in what aspects does it differ from the green economy? Gunter, who wrote several books about it, elucidates: ‘The green economy is expensive and subsidized, albeit with the best of possible intentions. The blue economy – blue because from space the earth looks blue – is cheap, cost-effective, quick to carry solutions; and at the same time mankind, society and the environment benefit from it. Innovation does not make the difference, in that respect both systems are equal.’ In the blue business model, society shifts from scarcity to affluence by a radically different way of handling problems. But again and again, technology carries surprising, cost-effective, and ‘open source’ scientific solutions.

Innovation 44
One of Gunters examples is from Colombia. His foundation saved a patch of rain forest, planted quick-growing bamboo on it, used the lower six meters as a construction material for houses costing less than a thousand dollar, and used the upper part as a feedstock for the paper industry. In this way, the inhabitants earned a living, and created a water-retaining top layer in the soil. The little patch of rain forest turned into a good place to inhabit (innovation 44). Another example is from Korea, where Gunter treated sewage sludge from the food and feed industry, which could have produced a fair amount of biogas for energy purposes, into pure carbon and hydrogen (51).

Inspired by ecosystems
Pauli, what a name for a scientist, is a Belgian by birth, and was an assistant to Aurelio Peccei (Club of Rome, of which he is a member himself). In 1992 he founded the first ecological factory Ecover (which produces biodegradable cleaning products), then founded ZERI foundation (Zero Emissions Research and Initiatives). Nowadays he is a university professor (Japan), a consultant, an entrepreneur, and the driving force behind systems which unite production and consumption, inspired by ecosystems. In his book The Blue Economy he formulates the principle ’10 years, 100 innovations, and 100 million new jobs’. He looks upon this book, published by Paradigm Publications, as a new report to the Club of Rome.

It is rare to come across someone like that in real life, and merely his lecture made it worthwhile to visit Springtij. It would seem that Gunter Pauli has a sustainable and cost-effective solution for all problems; but perhaps everyone should check the 100 innovations, enumerated at the end of his book.