There are no leaders in the world of microorganisms. All creatures have friends and enemies. Some of them are actual living organisms, others are at the intersection of living and non-living matter. Alternatively, they are only active in a reciprocal relationship. Microorganisms are very diverse, almost all of them are unicellular or even smaller. Like the bacteriophages, or phages for short; viruses that infect a bacterium. Mostly, they do this by injecting their genetic material into the bacterium. The latter is then stimulated to produce more phages. Ultimately, the bacterium bursts, leading to the spread of many more phages – a very rapid reproduction system. A phenomenon we now know well because of the corona pandemic. 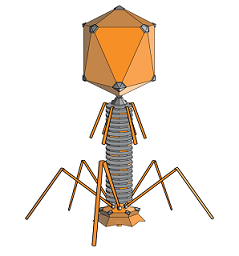 The mode of action of phages is very specific: most phages can take on just one bacterium. This is a major disadvantage compared to chemical antibiotics, that can attack many bacterial strains at the same time. For this means that, confronted with an infection, the doctor needs to find a phage that attacks precisely this bacterium. But on the other hand, this is a major advantage. For the phage will not attack other bacteria than the toxic one – whereas in an antibiotic cure, the medicine destroys many of the beneficial bacteria in the gut as well.

Phages are discovered early 20th century. In 1915 by the British bacteriologist Frederick Twort. And independently in 1917 by the French-Canadian microbiologist Félix d’Hérelle. Because of the war and its concomitant lack of funds, Twort cannot expand on his research on bacteriophages. But precisely these conditions stimulate the work of D’Hérelle (1873-1949). He is an adventurous entrepreneur. In North and Middle America he is involved in the fight against plant diseases and in alcohol production. In 1911 he and his family head for Paris. There he gets involved in (among others) research into the fight against grasshoppers at the Pasteur Institute. His first success is a microbial preparation taken from the guts of those very grasshoppers. Subsequently he isolates a preparation from chicken dung (a phage, as will become clear later), a medicine against chicken typhoid.

His method involves growing bacteria on a good substrate (for instance chicken dung). In course of time, this will become clear and translucent; this indicates that the bacterium has been infected by phages and is about to lose the battle. The therapeutic preparation is then produced by filtering the reaction mixture. His first success in humane medicine is the treatment of dysentery, using a similar preparation from a filtered solution of excrements of people affected by dysentery. This condition was a major problem in the trenches of WWI. He makes the correct diagnosis: that he deals with a virus that parasitizes on the bacteria. He also coins the name bacteriophage; the term means ‘organism that eats bacteria’.

Félix d’Hérelle is an adventurous man without an academic degree, who works anywhere he can make himself useful; from Argentina to India and from Alexandria to Paris. The conditions he tries to cure vary from dysentery to cholera and the plague. Around 1924, there is a hype over the prospects of phage therapy. But doubts remain on his method. Results vary a lot, maybe because of impure substances, maybe because of a low concentration of the phages. He doesn’t succeed in the isolation or characterization of the phages. Do they really exist? Wouldn’t the filtrate simply consist of an enzyme in solution? And remember Fleming, who struggled with the exact nature of his penicillin, around the same time. These doubts also cause an end to the interest of the American pharmaceutical company Eli Lilly. It is not before 1939 that the existence of bacteriophages is proven, by use of the electron microscope. Moreover, D’Hérelle quarrels with everybody. Although in 1924, he receives an honorary doctorate from Leyden University, and the Van Leeuwenhoek medal. 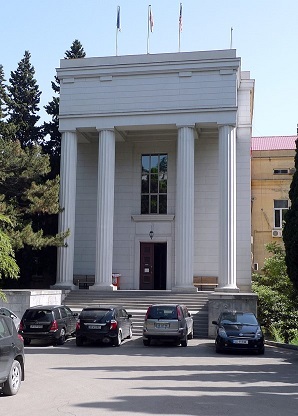 Front view of the George Eliava Institute of Bacteriophage, Microbiology and Virology in Tbilisi, founded in 1936. Photo: Wikimedia Commons.

But at one location, he makes a lasting impression, in Tblisi in Georgia in the Caucasus. There, George Eliava heads the central bacteriological laboratory. Eliava and D’Hérelle have met at the Pasteur Institute in Paris. Eliava gets enthused about the opportunities of bacteriophages in medical practice, and devotes his work in Georgia on this subject. In 1923, he studies the cholera bacterium in samples taken from the Mtkvari river. After some days, the bacterium has disappeared and Eliava links this to an action of bacteriophages. Within a few years, the researchers find more than twelve phages, that can control many bacterial infections.

But Eliava falls into disgrace with Stalin. Perhaps because he is an intellectual; but perhaps because he courts the woman who is also desired by Lavrenti Beria, the head of Stalin’s secret police. He is declared an enemy of the people and is executed in 1937. At that time, D’Hérelle cannot enter Georgia anymore; after a visit to Paris in 1935 he is declared an ‘unwanted foreigner’. He passes away in 1949. A forgotten man, even though he was nominated for the Nobel Prize ten times.

Eliava’s work in Georgia is continued in an institute named after him. There, bacteriophages even become part of regular medicinal practice. They are often used during the Second World War to treat wounded Soviet soldiers, among others on gangrene. After the war, the Iron Curtain stands in the way of an exchange of knowledge between the East and the West. Soviet doctors do publish on bacteriophages, but in Russian exclusively. Finally, work on bacteriophages is substituted by antibiotics, in the Soviet Union as well. By the mid-seventies, work at the Eliava Institute has almost come to a standstill. Researchers keep phage samples in their refrigerators at home in order to prevent them from being lost. In 1993, the institute is finally closed down. Occasionally, doctors still use the phage therapy, in Georgia and to a lesser extent in Poland as well.

But in the 21st century, the world finally acknowledges the seriousness of resistance to antibiotics. This marks a renewal of interest in bacteriophages.