You are here: Home / 2022 / February / Chemistry vs. antibiotics, # 57. Phage therapy, a promising alternative to antibiotics?

From being almost forgotten to being the most abundant kind of microorganisms: phages. Moreover, harmless to people. It is simple to contain a bacterial infection with phages, if one has access to a phage that takes on the bacterium in question. We can administer phages through the mouth, or apply them locally at infected locations. Doctors try not to use injections – our bodies tend to remove viruses from the blood. Phage therapy seems to be an attractive alternative to the treatment with antibiotics – in the latter, resistance will always come up, sooner or later. 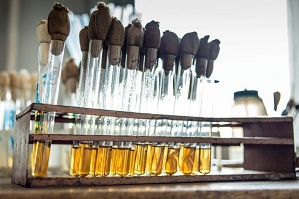 Which phage, for which therapy?

But the problem with phage therapy is precisely, how to find the proper phage. In principle, a bacteriophage will attack just one kind of bacterium. Moreover, this bacterium will have to contain a specific makeup of its DNA; the phage may lose its activity if the bacterium mutates (and bacteria mutate a lot, resulting in resistance). There doesn’t exist a ‘broad spectrum’ bacteriophage, analogous to antibiotics. But that disadvantage carries an important advantage. For the bacteriophage just kills that single kind of bacteria vulnerable to this phage. It doesn’t damage other organisms.

How do doctors know, which phage to use in a therapy? They determine that by growing infected cells in the lab. In the standard procedure, researchers use six bacteriophages. The search may be successful within three days; but sometimes, it takes longer to be successful, up to months. In order to shorten that period, laboratories keep an inventory of bacteriophages, a ‘library’. Often of a regional composition, as in each region different bacteria (and phages) are common.

Bacteriophages have the major advantage that they can mutate quickly – as fast as the bacterium on which they feed. Therefore, phages will never be confronted with a super bacterium that outsmarts them. Not for long anyway, because the phage will continue to mutate until it grabs the bacterium once more; an evolutionary arms race so to speak. Therefore, resistance is a problem that phages can overcome – in  nature, bacteria and phages have been in this ‘arms race’ for millions of years. But at the same time, this is one of the problems that stand in the way of the application of phages. Pharmaceutical companies tend to look for profitable therapies. Preferably protected by a patent. But how to file for a patent on an organism that mutates all the time, and therefore be just a bit different the next day? Moreover: if phages have the desired effect, they do their jobs quickly and efficiently. But then, how attractive will a medicine be, if patients recover very fast?

In the Western world, the use of phage therapy tends to be difficult because approval and control of treatments are not geared towards this therapy. Doctors tend to use cocktails of phages, in order to maximize chances that a bacterium is being taken on by a phage. But such a cocktail needs to be adapted all the time to the mutating bacteria – and that again needs to be registered. And a fortiori: registering a living organism that itself can mutate all the time, doesn’t fit into our body of law either. So far, such commercial and legal problems stood in the way of success for phage therapy in the Western world.

And yet, the pressure to be successful in the development of phage therapy is clearly felt. And several products have hit the market already, in the Western world too. Partly outside the realm of medical science. For instance, phages can dissolve biofilms consisting of bacteria, even if these have become resistant to antibiotics (an example of a biofilm is the well-known tooth plaque). In the food industry, biofilms of Salmonella bacteria are a major problem. And there are applications in veterinary practice. Intralyx (a company that employs a number of former employees of the Eliava Institute) obtained an American permit to apply a phage in the prevention of listeriose in poultry (ListShield). At Brigham Young University in Provo, Utah, USA, researchers look into phage therapy on American foul brood, a disease of honeybees. But generally in the Western world, application of phage therapy on humans is only possible experimentally.

One of the groups that researches bacteriophages is the group of Stan Brouns at Delft Technical University in the Netherlands. One of the researchers takes care of information exchange between different strains of bacteriophages. ‘Phages are able to incorporate information of other phages into the genomes of their own, and that will allow them to infect an entirely different type of bacterium,’ says Brouns. Another researcher in his team investigates how bacteria can develop resistance to phages. They discovered that our natural immune system and phages can cooperate. But Brouns too, acknowledges that we cannot solve all problems of resistance to antibiotics by using phages. Moreover, we don’t know yet the effect of a large number of phages on the human body. Our bodies might attack certain phages, causing an allergic reaction. We need to investigate such problems before we can approve phage therapy in the Western world.

An option of last resort

But what to do if people cannot be treated with antibiotics anymore, because they ran into a resistant bacterium? For a phage therapy they need to go abroad – primarily to the Eliava Institute in Georgia. Through the site fagenbank.nl/English, Brouns tries to answer questions people might pose. But for the time being, such treatments will not be paid for by the health insurance.

There is a major potential for phage therapy. There are major obstacles as well. Partly, these can be removed if health insurance companies would apply other criteria. Or should we want to accept that effective therapies are being held back because our system of health insurance isn’t tuned to them? A possible outcome would be the development of enzybiotics, enzymes that can fight bacteria. Many of these are obtained from bacteriophages; in fact, these are their active components. An interesting historic cycle: 100 years ago, researchers guessed that phages might be enzymes. Although we might still run into a natural arms race, if we pursue this avenue.

But then, the natural pathway might still be practicable. By the construction of phage banks and phage cocktails, like in Eastern Europe. By cocktails that would be adapted to the development of bacterial strains. One issue stands out: we need to renew our inventory continuously. Just like in the evolutionary arms race – but here, with the intermediate of mankind and its laboratories.

Phages can enter into a bacterium and start doing their jobs right away by killing it. But alternatively, it might nest itself in the bacterium’s genetic material and wait for the opportunity. What kind of opportunity? We call them prophages, at this stage. Bacteria infected along this pathway appear to have an evolutionary advantage over their non-infected peers. The modified genetic material may become an integral part of the genes of the offspring.

And that might be advantageous to us. For instance in the case of reproduction of beneficial microorganisms in our guts. Some researchers suggest that phages are indispensable in the evolution (the mutations) of bacteria. Or that the production of bacterial toxins (poison, like the cholera toxin) is being controlled by that part of their genetic makeup that they borrowed from a phage. Friend and foe; the picture becomes blurred.

Of course, we can try to apply the prophages to our advantage as well. We know examples of prophages that nest on an essential location in the bacterial DNA; for instance where it stands in the way of proper bacterial reproduction. Or even better, we can introduce prophages as a way of protection against malevolent intruders. We then come near the area of vaccines. And there is more. Phages and prophages can interact with cells in the human body, for instance those of our immune systems. Research on cancer of the intestines has shown this to occur.

Some phages bind to proteins in bacteria that are essential for their reproductive mechanism. For instance to a protein that controls the pump that removes foreign  molecules from the cell as fast as possible. In reaction to the phage infection, the bacterium will produce less of that protein; as a result of that, the pump will be disabled and the classic antibiotic might enter again to do its job.

The picture gets blurred more and more: who is the friend, who is the foe? We now know that everything is mutually connected, but it still is a moot question in what way precisely. We know that phages can modify the hereditary properties of other microorganisms like bacteria. And that they can modify our immune systems. We even suspect that they can change our hereditary properties. Therefore, phages make fantastic subjects for research and development. But their mere existence and their actions should also warn us for unexpected outcomes; or for side effects of results that we look for.

Sources:
Wikipedia: all names and products mentioned
Are Phages Overlooked Mediators of Health and Disease? The Scientist, February 1, 2021