Chemistry vs. bacteria, # 31. Help from an unexpected source

Often, people remark that discovery and development of antibiotics are quite unique. This holds true both for the sulfas and for penicillins and cephalosporins. There is a multitude of strange events and chance developments. And yet, we need to announce another important discovery: streptomycin. From an unexpected source: a bacterium. 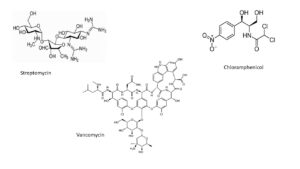 In the ‘40s and ‘50s, penicillins are hugely successful; cephalosporins carry major promises. Both are medicines from microorganisms. A world-wide search for more examples results. The American army finds a number of quite useful microorganisms. Albert Schatz, a PhD student with Simon Waksman at Rutgers University, finds a bacterium in a heavily manured land in New Jersey. From it, he isolates the antibiotic streptomycin on October 19, 1943. Waksman fears bacterial infection and more or less leaves his student to himself. Even worse, when Waksman is awarded a Nobel Prize in 1952 for his research, he has more or less forgotten Schatz.

But streptomycin is a real nugget. If penicillin and cephalosporin hadn’t been discovered by then, streptomycin would have made headlines all over the world. As early as 1944, the first grams of streptomycin are being produced by Merck (that also funded the research). They transfer part of their penicillin team to the development of streptomycin.

Streptomycin is the first antibiotic that actively contains tuberculosis, see further in this article. And it is active against the infamous E.coli. And against the organisms responsible for the plague and pneumonia. Streptomycin also contains food poisoning by Salmonella, infections of the urine tract and the heart, brucellosis (poisoning by raw milk products) and many others. Streptomycin strains have given rise to more than ten fine antibiotics. Among them well-known products like chloramphenicol (1947), chlortetracycline (1948), neomycin (1949); also vancomycin (1956) and the erythromycins (1952).

Chemists have always looked upon synthesis of these molecules in the lab as a major challenge. And indeed, at times they have succeeded in demonstrating such a synthesis, carrying an occasional Nobel Prize to the researcher. But that never resulted in a successful production on an industrial scale. We produce all products mentioned by fermentation of the microorganisms in question, with the exception of chloramphenicol (but then, that is structurally an exceptionally simple compound). Some of these structures are closely related, like the amino sugars in streptomycin and neomycin, followed later by kanamycin (1957) and gentamycin (1963). 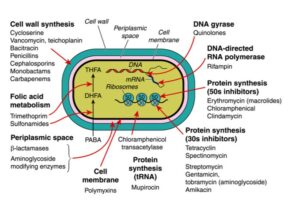 Mode of action of antibiotics on a bacterial cell (Shutterstock 47963917).

Once more: chance, serendipity or providence?

The huge complexity of the structural formulae is astonishing; and their wide diversity. Have a look for instance at the structural formula of vancomycin. Many authors judge these complex products to be a gift of nature. There is still a lot that we don’t know. Why do microorganisms produce such complex and diverse structures? Why do we still have to rely on ‘trial and error’ to discover them? The microorganisms have been found in agricultural land in Venezuela, in the sewer in Sardinia, in monkey’s dung in Japan, in the throat of a chicken and in land in Borneo, Indiana, Nebraska, Vermont, New Jersey, Virginia and New York. That the US are overrepresented in this list is merely because most of the search has been done there. Even now, 70 years later, we don’t have answers to these questions, or incomplete answers at best.

We know precisely, down to the atom, how and where the antibiotic attacks the pathogen. We almost invariably also get to know the mechanism of an emerging resistance. And yet, the bacterium’s ‘strategy’ in becoming resistant is still a moot point. How does the infamous hospital bacterium Staphylococcus aureus (MRSA) get to know that it can simply block the antibiotic action of vancomycin by substituting one nitrogen atom by an oxygen atom? For chemists: the amino acid alanine in one of the long chain molecules in the cell wall is being substituted by lactic acid. How many mutations did the MRSA bacterium ‘need’ to arrive at this result? We see scary examples of the same mechanism now in the development of mutants of the Covid virus. And a question of at least equal importance: how long did it take for Streptomyces Orientalis (the mould that produces vancomycin) to arrive at this quite complex chemical structural formula? Is the compound the result of an evolution that spans thousands of years, or had it completed its evolution just before its discovery in Borneo? And is it a coincidence that the same mould has been found on agricultural land in Indiana?

Genetic modification as a curing mechanism

In the course of time, we modified antibiotics producing microorganisms in any way possible, in order to arrive at an optimal production of the desired medicine. In  this process, researchers often applied drastic genetic modifications. But fortunately, the complicated discussion on pros and cons of genetic modification never touched the production of (lifesaving) medicines.

Now, also tbc is in the frame

The tuberculosis bacterium has long escaped our attacks. In spite of all wonderful results, from sulfas, pens and cephs. In the end, we managed to contain this bacterium with the help of streptomycin. The action of this medicine is completely different from that of penicillins. The substance attacks the genetic codes of the pathogen, and then inhibits the production of essential proteins.

In  hindsight and with today’s knowledge, there are two essential issues at hand here. Or maybe just one: the nature of the microorganism. The bacterium is very small, it grows slowly and can hide for a long time. Moreover, its outside skin is covered in wax that hampers many medicines in attaching themselves to it. Therefore, any drugs administered will not show a swift reaction in the body. The second issue is that large-scale longitudinal research programs hardly existed before 1950. Until then, the GP’s observation used to be the yardstick for medicinal action. Mostly, those observations concerned individual cases or small groups at most. The wonderful effect of the streptomycin/amino salicylic acid combination on the tuberculosis bacterium only surfaced with modern and lengthy research on major groups of patients. With the use of statistics as an essential tool.

The formula of amino salicylic acid will remind of the sulfas, even to the non-chemist. And rightly so, because the substance plays a part comparable to the sulfas. It stands in the way of building in p-amino benzoic acid in the pathway to synthesize folic acid. The combination therapy with streptomycin/amino salicylic acid remained successful until the ‘80s, when all of a sudden tb surfaced in the trail of AIDS. And now, resistant bacterial strains stand in the way of an effective control of tb. Therefore, tb mortality still figures in the top ten of causes of death; it is of the same order as traffic fatalities.