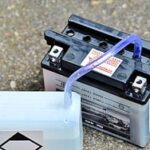 Much excitement in the universe of battery technology. Battery storage is rapidly growing world-wide, important for the energy transition. Batteries are improving and their costs are falling, all the time. And the million-mile battery might be coming soon. Meaning that the battery would far outlive the car and could have a second and third life.

‘Biobased materials and chemicals are driven by performance,’ we wrote in 2016. They do not compete primarily on cost, but on the new functionalities they offer. Now, in the middle of record low oil prices, this principle receives support from an article in Chemical and Engineering News, CEN. They highlight three companies whose biobased chemicals

Food loss and waste currently causes an estimated $1 trillion in economic losses globally each year, according to Lux Research, a Boston-based tech and advisory company. This constitutes not just an economic crisis but also a major humanitarian one. It has led the United Nations to set a goal of reducing global food loss and

Solar energy is rapidly becoming so cheap that it can crowd out other land uses, like agriculture. The farmer may earn a lot more from a monoculture of solar panels than from any crop. But this is an unfortunate development; it may do a lot of harm to the public perception of solar energy. Multiple