You are here: Home / 2019 / February / Efficient protein production and utilization

The world runs into planetary boundaries, or has transgressed them already. The three main problems can all be alleviated by a more efficient agriculture. Being: emission of greenhouse gases, excess of nitrogen fertilization, and biodiversity loss. But we will only succeed in doing so, says Johan Sanders, if we treat these jointly: above all, we should develop a more efficient protein production and utilization. 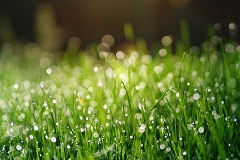 Grass produces twice as much proteins on the hectare as soy.

We should start thinking in a more holistic way, says Johan Sanders. We should not treat problems like greenhouse emissions as a separate issue, but we should address it in relationship with the other major global problems. Sanders is a professor emeritus of Wageningen UR, and still active, among others in the biorefinery company Grassa, of which he is a co-founder. To think in a more holistic way will entail having an eye for interrelationships. For instance, we should not look just at opportunities for different economic sectors to reduce greenhouse gases, but try and find the opportunities at the intersection of those sectors. That would help to bring to the surface unconventional ideas. Of course, we should also charge agriculture for its production of greenhouse gases in the ETS, not just industry. That would prompt agriculture to put greater effort in a reduction of its emissions. For instance, Sanders sees major reduction opportunities in a joint effort of arable farming, cattle breeding and pig breeding. Or in a better cooperation of industry and agriculture, if the former would use biobased resources.

The planetary boundaries are from the much cited article by Rockström et al. in Nature in 2009. The authors showed us that we already transgressed three planetary boundaries: CO2, nitrogen fertilization and biodiversity loss. ‘If we continue along these lines, problems will only get worse. Global population grows, it becomes richer, we will need twice as much proteins in twenty years’ time. Then we will need more land, and more fertilizer. Arable farming and livestock husbandry emit greenhouse gases, that will increase too. If we continue to treat planetary problems as separate issues, we will continue to move from incident to incident,’ says Sanders, ‘like now in CO2 reduction. We can only solve the CO2 problem AND the nitrogen problem AND the biodiversity problem, if we develop a more efficient agriculture. For instance in the amount of proteins that we grow on the land. Soy will yield 1 ton/ha of proteins, grass 2 tons/ha, and grass together with legumes sown in strips 3 tons/ha. So there is much room for improvement!’ 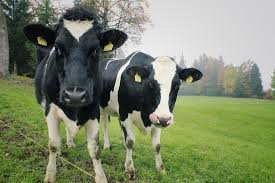 Cows grow better on pressed grass than on fresh grass.

We should develop a more efficient protein production and utilization. Biorefinery is the key to this; Sanders says it can serve 2 to 3 lords on the same hectare. If we separate our agricultural produce into components (biorefinery), then we can use them in such a way that animals will grow better on them, and produce less manure. Pressing grass for instance will produce a juice that contains much of the proteins; these are not very valuable to the cow, it will take a lot of energy to process these proteins, whereas these are very important to the pig. On the other hand, the cow can very well process the proteins that stick to the fibres. The efficiency of nitrogen processing will increase by 50% if we feed the cow on the pressed grass. And the pig will benefit from the proteins in the grass juice. Moreover, both will produce less manure, that will emit less methane and ammonia on top of that, which will reduce the cost of spreading the manure. And ensilage will not cause any losses to the farmer any more, an additional 15% at least. Better on all sides.

But it is hard to convince farmers. ‘If we tell farmers that they can separate and sell the proteins in their grass, they don’t believe us. But our technology could have major benefits for climate policy, among others. Just by reducing methane emissions from manure, the Netherlands could reduce its emissions by 3.5 Mtons of CO2 equivalent. And at zero cost. Farmers do understand what we say if the issue is manure, but if the issue is changing the fodder composition and its consequences for greenhouse gas emissions, they take a ‘wait and see’ attitude: show us the proof. We hope to prove our point in Ireland, government there lends us all kinds of support, and we will conduct tests there.’

‘In Grassa, we used to concentrate on grass and on cows. But our focus is shifting. We now pay more attention to pigs. That is also prompted by our recent involvement in biorefinery of greenhouse waste. We can biorefine those wastes on the same equipment that we use for grass biorefinery. The vegetable processing industry produces a lot of cutting waste, its processing costs are high. Greenhouse horticulturalists spend a lot of money on removal of their side streams. But we can recycle minerals from leaves, and reduce waste volume. Greenhouses have major seasonal variations; we have a small-scale mobile processing unit that we can install on the farm, very smart for this purpose. We can work at the horticulturalist’s farm and then move on processing grass. Although we will start benefiting from this synergistic effect only if we would have many units at our disposal.’

‘Our work rests on small-scale processing. We process the yield close to the field, producing storable intermediate products. The majority of the water we return to the land, together with the minerals. We also do that in Africa, where farmers are in dire need of fertilizer. Wageningen UR developed containers for processing cassava to storable cassava meal, in the company Dadtco. They completed the development there; part of the company has been sold to new shareholders, who have invested a lot of money in it. We should not restrict such processes to a single farm; one needs to cooperate regionally, within a radius of 3 to 4 km, i.e. across a surface of a few thousands of hectares. That will produce a lot of benefits.’

So, all in all, how is Grassa doing?
‘Times are exciting, we are in the middle of the Valley of Death. We need to grow, we have lots of ideas and projects but few resources. So far, the shareholders have come up with the money. Now the general manager has put a stop to that, we should attract investment from venture capital funds. If we succeed, there is a bright future lying before us. Our technology will benefit everybody. We will come up with a more efficient protein production; the yield will be sold at a better price; relative to fodder input, cattle and pigs will put on more weight; they will produce less manure, and the footprint will come down.’ Says Johan Sanders.

Interesting? Then also read:
The shelf life of green chemistry
Biorefinery as the key to the circular economy
Johan Sanders: counteract inefficiency in biobased economy development