You are here: Home / 2019 / January / Biohydrogen: the next green alternative fuel

Hydrogen has a high energy content (120-142.9 MJ/kg); it is a clean energy carrier and can replace fossil fuels. Hydrogen is already a fuel of choice for space programs; it guarantees environmental quality and mitigates climate change. However, the presently used commercial methods for its production are not environmentally friendly; they require a major energy input and entail high costs. Biohydrogen production offers an environmentally friendly alternative. It makes good use of organic wastes and requires less energy input (ambient temperature and atmospheric pressure) compared to thermochemical and electrolysis processes. 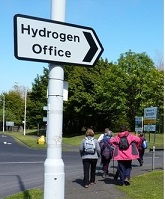 In the field of biohydrogen research, researchers use well-characterized and composite microorganisms; they have made significant efforts to enhance hydrogen production by using co-culture systems (‘consortia’). A consortium is a highly diverse and complex community of microbes, capable of performing complex tasks in cooperation. With single microorganism, process efficiency is limited and hydrogen production is low. The co-culture system works in harmony, ensuring stability of the process; it has a better performance by performing complex functions, such as substrate hydrolysis, simultaneous substrate consumption, exchange of metabolites, working on a variety of substrates through co-existence. In comparison to mono-culture, co-culture offers synergistic effects with higher yield, decreased fermentation time and higher biohydrogen production. Microbiologists and engineers have exploited the microbial communities to engineer synthetic consortia for biohydrogen production.

The selection of microflora from various sources is a difficult task, due to the co-existence of hydrogen consuming bacteria. Dark-fermentative (in absence of light) bacteria are fast growing and produce volatile acids at a faster rate. On the contrary, photo-fermentative (in presence of light) bacteria that process the acids to biohydrogen are slow growing, which causes an imbalance in the utilization rate of volatile acids, limiting hydrogen production. These issues can be eliminated by incorporating two different microorganisms, capable of dividing the tasks and working in tandem for increased yield. Even better yields result from a two-phase system that avoids process termination, using a multi-layer photo-bioreactor for efficient light utilization, repeated fed-batch culture to reduce run time and improved bioreactor design to overcome hydrogen gas-hold up issues. 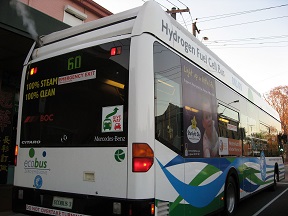 One of the main aplications of biohydrogen will be in (public) transport.

In recent years, biohydrogen production advances with improvements in the co-culture system, replacement of costly substrates with utilization of organic wastes (lignocellulosic and food wastes etc.) and industrial wastes (crude glycerol, apple pomace, eggshells etc.). The crude glycerol produced from the biodiesel industry as a by-product has proven to be an excellent source for biohydrogen production. Addition of apple industry waste after hydrolysis also serves as an excellent co-substrate. Mixing of two or more substrates provides a benefit of complementary characteristics for an effective management of the fermentation process; it helps to minimize industrial treatment costs, and valorizes wastes into value-added products. Using waste eggshells will save around $100,000/year of landfill treatment costs on eggshells (proposed reactor 100 m3 with co-/mixed-culture and photofermentation); utilization of biodiesel production sludge for biohydrogen production with a closed system will save around $270,864/year effluent treatment costs. The produced biohydrogen using crude glycerol released by a typical biodiesel industry can be used or transformed into various forms of energy, such as electricity and heat.

A novel approach of the co-culture system was adapted by the Integrated Project ‘HYVOLUTION’, funded under the EU Framework. This provides the highest biohydrogen production efficiency for small-scale industries. The economically viable process for hydrogen production, a combined co-culture system was scaled-up from lab-scale to 100,000 L using a distillery effluent. This sustainable way of effluent treatment producing biohydrogen, produced 21.38 kg of hydrogen in less than 40 h. In order to maximize the economic value, it has been proposed to blend 5-15% hydrogen into the existing natural gas pipelines.