You are here: Home / 2017 / October / Nano3Bio: promising results for chitosan

Nano3Bio is the name of an EU-funded program that investigated production and properties of chitosan, a promising biobased material. Recently the consortium held its final conference in Hyderabad, India. Chitosan holds important promises for medicine, agriculture, cosmetics and other industries like paper and textiles. Among others, Nano3Bio developed new perspectives for cancer treatments and repair of damaged human tissues. 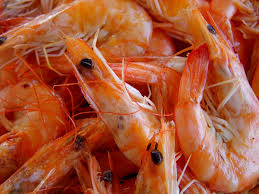 Shrimp shells are an important resource for the production of chitin, the feedstock for chitosan.

Chitosan is readily produced from chitin, the main component of insect exoskeletons and of crab shales. Chitin is the second most abundant substance in living nature, after cellulose. ‘Nano3Bio has achieved or prepared a breakthrough from basic research to biotechnological applications in important fields,’ says Professor Dr. Bruno Moerschbacher, biologist at the University of Münster and coordinator of the project. Researchers of the Nano3Bio project discovered a protocol for production of chitosans with defined structures. They also developed a low-cost protein engineering technology and they isolated and identified the first chitosans generated by microalgae. Moreover the project brought out significant research results on the internalisation of chitosan nanocapsules into human cells. In this way, biologically active compounds, vaccines and drugs can be delivered into the cell, by a nano messenger made from chitosan so to speak. This is especially relevant for therapies of cancer with chemotherapeutics, and could lead to more effective therapies with reduced adverse effects and better life quality for patients.

Also, Nano3Bio identified genes from different organisms (bacteria, fungi, algae) that can be used to drive the biotechnological production of encoded enzymes, used in the conversion of chitin into novel high quality chitosans. And it invented thermo-sensitive chitosan hydrogels which are promising materials for regenerating damaged tissues. Moerschbacher: ‘Some of these achievements have a huge economic potential.’

Chitosan, a compound that looks like a plastic, is very interesting because it is not rejected by the human body, and because is fully biodegradable. ‘These are impressive results. However, the future road still appears to be challenging,’ says Moerschbacher. ‘For example, it will be important to further determine which biological organisms are able to produce exactly that quality and quantity of chitosan required for specific applications.’ The researchers assume that many other fields of application will be found for specific chitosans. The Nano3Bio program that ran for 4 years and cost € 9 million, also formulated policy recommendations based on a regulatory analysis for the field of nano-biotechnology and chitosans.