Cyrene is a biobased solvent intended to substitute toxic solvents in fine chemistry and pharmaceutical industries. It is produced by Circa, an Australian company that has partnered with the Green Chemistry Centre of Excellence (GCCE) at the University of York, UK, and with pulp and paper company Norske Skog to start industrial production in Europe.

Cyrene® is a ‘chiral dipolar aprotic solvent’. It is ‘aprotic’, meaning that it cannot release protons like water or alcohol. It is ‘dipolar’, meaning that is asymmetrical and positively and negatively charged at different sides of the molecule. And it is ‘chiral’, meaning that this asymmetry also carries an optical activity of the substance. These are desirable properties for solvents in some operations, notably in the fine chemistry and pharmaceutical industries. Cyrene is a biobased alternative to solvents such as NMP, DCM and DMF, which are under regulatory pressure worldwide due to their toxicity. Cyrene is made from levoglucosenone, a highly flexible platform chemical also produced by Circa. The company produces all its renewable chemicals from cellulose.

Circa and its partners have received substantial grants for the further development of their products. In June it was announced that the University of York and 10 partners including Circa, had started a € 4.3 million EU project focused on replacing traditional, fossil-based solvents. This project, called ReSolve, looks for alternatives to substances categorised as very high concern (SVHC) under European REACH regulation. The project is set to demonstrate the production of novel alternatives to toxic solvents like toluene and NMP, and evaluate their toxicity and production processes. 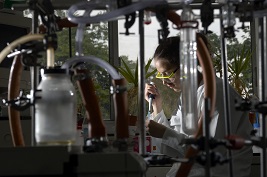 And in July it was announced that Circa Sustainable Chemicals UK won an Innovate UK grant, which will be used to develop new applications for bio-based solvents. Circa will focus on two biosolvent application areas: polymer dispersions and coatings removal for paint or graffiti. After winning the grant, Jeff Eaves, General Manager at Circa Sustainable Chemicals UK, said, ‘we were glad that bio-based solutions won an open call competition, confirming the bioeconomy’s potential and helping to boost biomaterials’ share in markets dominated by petro-based products.’

But we should keep in mind that this is just a start. For the time being, these markets are small, and solvents should be removed completely anyway before marketing the product. Therefore, this development will not affect much the consumer. But it does show that biobased chemicals develop a market of their own, based on performance rather than on their green provenance – a heartening development.

Interesting? Then also read:
Chitosan, a sleeping giant waiting to be woken
Biobased materials and chemicals driven by performance
New study reports that in Europe, biodegradable plastics growth is in the bag