The International Conference on Bio-based Materials, an annual highpoint on the bio-based industry’s calendar hosted by Germany’s nova-Institute, was held this year for the tenth time, in Cologne, Germany. As always, the conference concluded the first day with the presentation of the Bio-Based Material of the Year innovation award. The award, sponsored by InfraServ GmbH & Co. Knapsack KG, a service provider for the planning, construction and operation of plants and sites. 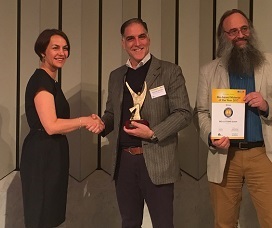 Gordana Hofmann-Jovic, of InfraServ Knapsack, the sponsor of the Bio-Based Material of the Year innovation award, winner Eduardo Gordillo, and Michael Carus of nova-Institute.

The award celebrates new developments in biobased applications and in the markets for biobased products that were either launched in 2016 or are due to be launched in 2017. Following a 10-minute pitch from each of the six shortlisted nominees, the top three winners were selected through an on-site voting process by the conference attendees. This year, the top honour went to a start-up company called Bio-Lutions, for their packaging and disposable serviceware solutions made from agricultural waste.  ‘We want to eliminate packaging made from petroleum plastics and virgin cellulose,’ explained Eduardo Gordillo, during his 10-minute presentation. ‘We have developed a method that uses natural fibres to create packaging and products that are sustainable, non-toxic and biodegradable. Basically, we are offering packaging solutions created by using up-cycled agricultural waste, which is converted into self-binding Micro and Nano Fibrillated Natural Fibres.’

Winner Gordillo, who is originally from Colombia but who has lived in Germany for the past twenty years, came up with the idea of putting agricultural waste to use as sustainable, ecological packaging some five years ago. ‘We had our breakthrough three years ago,’ he told us. ‘The hardest part wasn’t the technology, it was finding investors. We spent the past two years scaling up the process and talking with investors.’

The process is a relatively straightforward one that starts with what Gordillo called ‘the conservation of the fibres’, which mainly serves to eliminate the water in the waste. A mechanical process subsequently converts these into completely self-binding fibres, without using heat or chemicals. ‘The final product is made using a pulp moulding process,’ said Gordillo. ‘Like an egg carton’. In fact, moulded pulp is remarkably versatile and an excellent formable material providing endless design possibilities. The process yields the most ecological bio-based material now available, with the lowest carbon footprint and shortest, energy-efficient production method requiring a mere 3.5 litres of water per 1 kilo of product.

The company is aiming to set up small-sized – 2000 tonnes p/a – local plants that process local agricultural waste into packaging for local producers.  Gordillo: ‘Our customers will be our raw material suppliers as well. For example, we can say to a greenhouse tomato grower: give us your waste and we’ll turn it into packaging for your product. We get cheap feedstock – their waste –  so we keep the price of the packaging down.’ As he pointed out: ‘If we are not cost competitive, we won’t be a success. It’s that simple.’
The company has received funding from a government upscaling programme and will open a first plant in India in November of this year. The idea is to then open up local small-scale operations in countries around the world. ‘Wherever there is agricultural waste, we can site a new plant,’ said Gordillo, who said he was ‘thrilled’ to have won. ‘This is an important award that is internationally recognized in our field,’ he said. ‘The nomination alone brought us ten new business contacts, all of whom were interested in our technology.’
‘We believe in this project. We are offering an elegant solution to the problem of plastic packaging waste,’ he added. ‘This was the first time we entered a contest like this. We never expected to win, but are surprised and very proud with this recognition of our bio-based material.’

This article first appeared on the Plastics News Europe site.

Interesting? Also read our columns:
CocoPallet: grow in niches and compete on price
New biobased materials will carry the breakthrough for the biobased economy
Fibres of the future: cellulosic fibres from wood