You are here: Home / 2015 / March / Stefano Facco (Novamont): locally based and careful biorefineries have the future

Novamont is an Italian company that aims to develop materials and biochemicals through the integration of chemistry and agriculture. It is one of the flagships of the rapidly expanding Italian bioeconomy. At the World Bio Markets conference in Amsterdam, we spoke to Stefano Facco, their New Business Development Director. 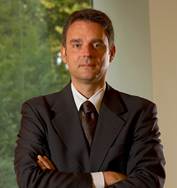 ‘In the bioeconomy,’ Facco says, ‘we cannot follow the same rules as in the fossil-based economy. An industry based on sugar cane may be perfect in Brazil, and the  corn-based industry has a great future in the US; but we cannot export those models to countries with entirely different climates, crops and agricultural models. It has no sense transporting those raw materials across the globe; instead, each region will have to build a bioeconomy of its own, based on its local crops and conditions. In Southern Europe, sunflower could be an excellent feedstock for the green chemical industry; but again, in Africa, where green chemistry has a great potential for rural development, companies will have to develop new models.’

Matrìca, a biorefinery integrated in the local area

Novamont (together with Versalis) has constructed one of the surprising new industries of the bioeconomy, the Matrica factory in Porto Torres in Sardinia, about which we wrote earlier. Versalis, a petrochemical company, provided its engineering know how and constructed the hardware, whereas Novamont developed and supplied the technology (a completely new and world-first industrial process). Its feedstock is the thistle-oil (and other crops), a low input crop which can be grown abundantly on the numerous fields that have been lain fallow on the island. With good agricultural skills, farmers can harvest 16-17 tons of biomass per hectare, of which 10% seeds. After extracting oil from the seeds, the remaining material can be used by local farmers as animal feed. The thistle accumulates its water in the winter and does not need irrigation in the dry Sardinian summers. Thistle cultivation prevents erosion and thus contributes to conservation of the island’s habitat. And it carries an income to the farmers. This year, Matrica cultivates 4,000 hectares of land, and it intends to enlarge that to 10,000 hectares to feed its factory. Novamont processes the vegetable oil to many biobased chemical intermediates, suitable for the production of lubricants, greases, polymers, cosmetics, herbicides  and other products. ‘Completely new plant, new technology,’ Facco says. ‘Careful with the land, careful with the environment, and careful with the local community. A conservative industry in the best sense of the word, a biorefinery integrated in the local area.’ 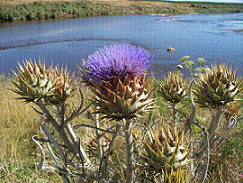 The thistle, a local and sustanable crop.

One of the important characteristics of this scheme is the close cooperation with the local farmer’s cooperative Coldiretti. ‘Individual farmers are too small to form a critical mass, they need their cooperative to make good deals for them,’ says Facco. ‘For Matrica, the cooperative is an essential partner to show the farmers that this new scheme might be profitable for them. Traditionally directed towards the food and feed markets, they need to be made aware that growing feedstock for a chemical industry might just as well carry a reliable income to them. And last but not least, farmers’ cooperatives are a political force that helps the political and administrative dialogue.’ Local conditions may differ, but these considerations have universal value in building the bioeconomy.

Although he has worked in the biofuel industry for many years, Facco thinks that the present political emphasis on biofuels is misguided. ‘In the petrochemical industry, fuels carry the bottom price. In the bioeconomy, that will not be otherwise. Biofuels have little added value, and in Europe we have not enough land for them. Biochemicals, on the other hand, could have a great future, with high added value to Europe. The low prices we pay now for many imported products, especially commodities, are largely due to the low social and environmental standards in many countries. We cannot be green on the shoulders of other people who still have not reached our high standards. We should export these high standards to them, for otherwise we will witness a race to the bottom. And we could develop and produce many chemicals, intermediates and finished goods by our own. Properly done, many products could come back to Europe.’

Novamont is a very interesting company with many new projects. Next year, Facco says, Novamont will open a new plant at their Veneto facility, where it will produce 1,4 BDO (a much-used intermediate product) from sugar by fermentation. More news will follow. And we will keep following them.