If plans work out as projected, Sardinia’s new Matrìca plant in Porto Torres might show the way into a new industrial future for the whole of Europe. The Matrìca project, sized € 500 million, will turn the site of an old petrochemical plant into a modern biorefinery on the basis of a very unpretentious feedstock: the thistle. From which the factory will produce biochemicals, biointermediates, bases for lubricants and bioadditives for rubbers. 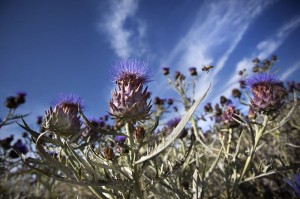 Better income to the farmer
Matrìca is a word from the local Gallurese dialect that means ‘mother’ in the sense of matrix that creates and renews life. The company of Matrìca is a joint venture between Versalis, a daughter of Eni, the Italian petrochemical company, and Novamont, one of the world’s frontrunners in bioplastics. The thistle, and other oleaginous crops, will be the raw material for a ‘third-generation biorefinery’, now being created in Porto Torres. The thistle is a perennial herbaceous species fully adapted to Mediterranean climate conditions, and perfectly suited to hot, dry climates. It grows during autumn, winter and early spring on marginal farmland with low fertility levels, producing high quantities of lignocellulosic biomass and seeds with high oil content even under conditions of scarce irrigation. 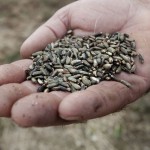 On much of the land in Sardinia, wheat is no longer remunerative: production costs amount to € 600–700/hectare, and with a production of 2 tonnes/hectare, the income is around € 600/hectare. Thistle is a common weed growing on land having been lain fallow with European subsidies; now this thistle appears to be a perfect feedstock for a biorefinery industry. On marginal land, the estimated yield from the second year onwards is around 15-17 tonnes/hectare of biomass and 1.5-1.9 tonnes/hectare of seed. This would result in a margin for the farmer of € 280–380/hectare, net of European premiums. On fertile soil, the results could even be better: the crop would generate 29 tonnes/hectare of biomass with 2.4 tonnes/hectare of seeds. The net result is heavily dependent on efficient harvesting technologies, still in development. 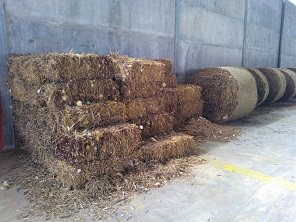 An enormous opportunity for Sardinia
In a first phase, lignocellulosic waste resulting from the transformation will be used in energy production, but in the future biomass will be valorised as much as possible (e.g. it will be used as a source of sugars for bioconversion to chemicals). Oil from the seeds will be a feedstock for building blocks for bioplastics. ‘But thistle is not just about biomass and oil,’ said Mauro Marchetti of the Italian National Research Council (CNR) at a conference in spring 2013. ‘It is also about substances that have high levels of added value: protein-rich flour and nectar.’ The flour could be processed into animal feed, in particular for the island’s cows and goats, and the nectar could produce a high-quality honey.

‘The efficient use of resources,’ said Marco Versari, a member of the Matrìca board, in 2013, ‘does not simply represent a strategic requirement for the planet in environmental terms, but also an enormous opportunity to strengthen the competitiveness and innovation of the Sardinian economy, based on new technologies that are positively integrated into the various local areas.’ 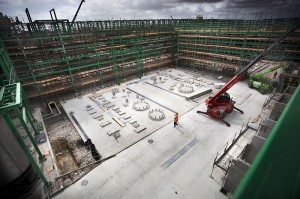 New local employment
The new plant is important for local employment. A workforce of some 200 is active in the new site construction, and at full capacity, the plant could employ 680 workers, many of whom were laid off when the Eni plant was shut down. Among this new workforce will be local graduates from the University of Sassari and Cagliari. Moreover, Matrìca aims to create an integrated product chain from vegetable oil to bioplastics, and to tap in to a market for bio-based chemicals that is supposed to grow fast in the future.

The old industrial area was not exactly well-known for its environmental qualities. Environmental groups reported ‘heavy pollution of the sea as the result of the release of poisonous substances’. But the new scheme forsees to clean up the old site in addition to reinforce the Sardinian economy.