We should create a carbon tax now, as energy prices are low, said the British economist Paul Ekins last week in The Hague, at a conference on green growth. That will allow us to start the necessary transformation towards taxation of resources (and reduce taxes on labour); while at the same time shielding energy intensive companies from excessive costs. This is how the Danes have done it, when energy prices were low the last time. And have been able to sustain that scheme, when energy prices rose again.

The carbon tax in the green economy

A carbon tax, a levy on energy carriers dependent on their CO2 production, is a necessary instrument in the green economy strategy that Ekins has in mind. Towards an economy characterised by climate stability, resource security and environmental quality. A strategy dedicated to the greening of the whole economy, not just to the development of green sectors. ‘Brown growth’, according to Ekins, will inevitably run into difficulties and be undermined by resource and climate instabilities. ‘Green growth’ on the other hand is not a contradiction in itself, ‘it is not clear how we could ‘stop’ economic growth even if we wanted to.’

Nevertheless, government support is a prerequisite for greening the economy, even if innovation by itself is increasingly ‘green’. That is because environmental goods are largely public goods, that therefore will have to be valued, promoted and protected by public bodies. Policy plays an important role in the new green growth, through tax reform (e.g. the carbon tax), consumer information and labelling, and the creation of mission driven R&D agencies, new financial institutions and new public-private partnerships. 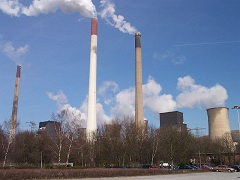 With a carbon tax, industrial structure might start to change in a sustainable direction.

We should invest in innovation

Ekins expects large benefits from the greening of the economy. Not just from the avoidance of the costs of ‘brown’ developments (for instance because of climate change; for a personal account see here); but also from new investments like in new infra and in the improvement of the quality of life. And from comparative advantages to companies and countries still on the ‘brown’ pathway. But would not better resource efficiency show up negatively in national accounts and give the impression of negative growth (even if the product would be better and smarter)? No, Ekins said, I am convinced that smarter, i.e. brainier products will always show as real economic growth.

China is going to be a great impulse for green growth, Ekins said, because of their need for environmentally benign technologies. Green growth will come from sources not unlike those that propelled growth in the past: capital accumulation, and investment in applied knowledge and innovation. It will not be stopped easily by shortages – as there is no shortage of renewable energy, nor of resources, if applied properly. Green growth just needs caring by government through well-devised policies. Like a carbon tax, at a short notice.

Also check: Greening the Recovery, UCL report drawn up by a commission headed by Paul Ekins.