You are here: Home / 2014 / December / BioProductProcessor comes to the farm

Biorefinery will come to the farm. On the basis of small-scale equipment that fits in a container; that allows farmers to create more value from their crops. The BioProductProcessor feeds on oily crops and a volume of well-sealed enzymes. It produces pure plant oil (PPO) and a press cake that is suited for use as fodder and that can be further processed to valuable biobased chemicals in the future. PPO is consumption-grade, and the farmer can run his tractor on it; it can also be upgraded to pure diesel oil (Advanced Pure Plant Oil, APPO). 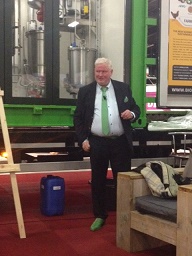 The zoo, launching customer for the BioProductProcessor

The first BioProductProcessor (BPP), constructed by entrepreneur and innovator Peter van der Klok and his company TCEGoFour will be installed in the new zoo in Emmen, in the province of Drenthe. The products feeding the installation will be harvested from a 17 hectare water catchment area around the zoo, from a number of crops (in rotation). The installation will produce biodiesel for a truck in the zoo, edible and frying oil and press cake for the elephants and giraffes. By the way, the giraffe area will be equipped with the first drawbridge made from composite materials, another innovation from Drenthe. Both the BioProductProcessor and the composite bridge have been constructed on-site by local companies. Together with Drenthe province, with which he has concluded a Green Deal, Peter van der Klok aims to sell and install BPPs everywhere. The province helps him, for instance, by promoting the use of biodiesel. Near Assen it constructs a major mobility centre, TT Plaza, that will advertise the use of 100% biodiesel in the province. ‘Drenthe will run entirely on biodiesel soon.’

Peter van der Klok started out by valorising the 80% fish waste that remains after the catch. Through cooperation with scientific researchers he has now refined his process to the present BioProductProcessor. Recently, he showed his prototype on the Agricultural Exhibition in Assen. The BPP could well strengthen rural economies. The device shown has been optimised for the processing of rapeseed, but it can also process other oily seeds like flax, hemp and sunflower, and even waste frying oil. Stems and straw are separated and remain on the land. In addition to PPO and press cake, the process also yields potassium and phosphate; it does not produce any waste and therefore represents a major opportunity for small-scale biorefineries at the farm. According to Peter van der Klok, ‘this is the ultimate process that can raise farmers’ incomes, as it allows them to gain more money from their crops.’ And many subscribers of a statement of intent, among which farmers with varying crops and business models, agreed. 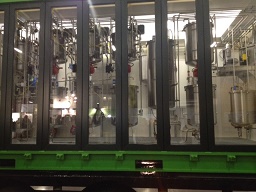 The figures presented are impressive; like the Energy Returned on Energy Invested (EROEI) of the BPP, that amounts to 20 according to the innovator, whereas this would amount to 2 with many competitors. He puts the payback time at 2.5 to 5 years. Peter van der Klok also developed a financing scheme: the smallest type in an easily transportable container (farm size) can produce as much as 100,000 litres of pure biodiesel at a price of € 0.85 per litre. This type sells at less than a quarter of a million Euros. Buyers lend him 10% of this amount, the remainder is financed from other sources. The farmers do not need to bother about the production in the BioProductProcessor, processing will be monitored from Stadskanaal where the company of TCEGoFour is located. The company will also develop a larger ‘corporate’ model with a capacity of 4 million litres of biodiesel annually. Several visitors judged this day to be ‘historic’. And that might indeed be the case, Peter van der Klok himself envisages production volumes of over a thousand devices a year, particularly if the concept would make a breakthrough in Germany and France. Will the innovation for small-scale, affordable and local biorefinery come from Drenthe?