The Dutch Scientific and Technological Committee for the biobased economy (WTC) has published its second and last report. Elsewhere on this site, we will go into the committee’s recommendations, intended to turn the Netherlands into a green society. Here something about the WTC, its relationship with the ministry, and with this site.

A role within government
The Dutch government likes asking advice on policy to a multitude of advisory committees. Not always to make up its mind – WTC’s remarks on the development of society towards sustainability, and on the means to achieve that goal, are hardly reflected in government policy. As a scientific advisor, one might have second thoughts about this, but this is how it works; often, I have the feeling that reports like the one just published by the WTC are just a false flag, to say it unkindly. And this would hold true for all other policy advisors. In this case however, things are slightly different, and WTC reports do play a role within government, and in the process of putting the biobased economy on the Dutch policy map. Moreover, they might show the way for other countries, because the Netherlands have an excellent starting position in agricultural and chemical knowledge, and because most other countries heavily bet on bioenergy instead of biobased materials.

WTC was very well supported and guided from the ministry by Roel Bol, the great proponent of the biobased economy within the civil service. Roel too will step down in the near future. He will get his pension within a few years. He will become a ‘special envoy’ on the subject of ‘green growth’. That might mean that he would have a lot of leverage to promote the biobased economy, or he might come to fit in with ‘Old soldiers never die, they…’. Anyway, he was a very important proponent of the biobased economy in the Netherlands, working within tight constraints of shortage in funding and regulation still tuned to the fossil era. I remarked that he ‘too’ will step down in the near future, because that same vague formula also holds for the WTC. The committee will stop its activities in its present form, but it will continue its existence in another way, with a new chairman (or chairwoman), and probably on a broader subject. 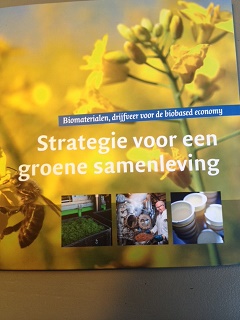 New industry
All in all, a very fine committee for the long term that has reflected for several years on the question how the Netherlands will have to develop in 20-30 years’ time, what will then earn an income to the nation, how it will have to become sustainable – a word with less meaning over the years – and how it should profit as much as possible from its strengths. Will the country develop a new industry, and to what extent has it liberated itself from the fossil era? The answer: in qualitative terms more than often thought, in quantitative terms quite not enough.

A last word on the WTC. On us. We, the editors of this site and the editors of both reports as well, have had the prerogative to attend WTC meetings for almost five years. A truly academic environment. Both reports result from discussions in the WTC, and this site has been erected partly on the foundation of knowledge and ideas drawn from these discussions. To put it into perspective: the reports have been edited under WTC responsibility, this site is the responsibility of our own. If Roel Bol has shaped the biobased economy within the civil service, WTC has done so within the scientific realm.

Towards biobased materials
Finally, the first WTC report ‘Towards green chemistry and biobased materials’ was published in April 2011. Robert Dijkgraaf, then still at the Royal Dutch Academy of Sciences (KNAW), was among those who received a first copy. He remarked that he saw just one flaw in the report: that it had not been published by KNAW itself. A very elegant praise. Then already, the upshot of the report was that the biobased economy should not be concerned with energy, but with the future materials supply. A view to which the WTC adhered in its second report ‘Strategy for a green society’, and upon which it elaborated.