You are here: Home / 2013 / September / Sugar as a feedstock: competition in the market

Just a month ago, on August 3rd, we wrote that the European sugar market will open up in 2017, and that in preparation for that event, Dutch farmers/cooperatives now already offer 2 million tons, at fixed contracts, as a feedstock for chemical industry. True, but there are rivals in the field: sugars on the basis of starch crops. 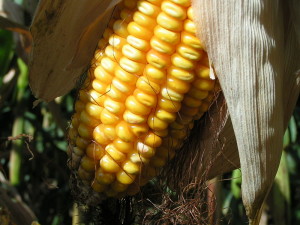 The opening European sugar market may induce producers to sell iso sugar from maize on the European market.

Re-reading last month’s optimistic story will show the opportunities for a local biobased economy in North-western Europe. Imagine the impact on industry of 2 million tons of sugar. And much more, if the efficient sugar beet producers in North-western Germany, Flanders and North-western France and their cooperatives would follow suit. That would be a major cornerstone for a new green chemical industry. For biosuccinic acid and other biobased building blocks. We did not note at that time that others will enter the opening market as well – but we have been notified that there will be such new entrants.

Increased competition
Those new entrants will be parties selling iso sugars. They produce fructose – with dextrose as an intermediate – from starch, using crops like maize, wheat and tapioca as a feedstock. Potatoes would be too expensive for that goal. This will mean for sure that iso sugar factories will be constructed in Europe, subsequently producing ethanol and possible other chemical intermediates. That will amount to competition. The US and Brazil pursue this pathway already. There, first and second generation sugars – from sugar cane and maize respectively – and ethanol are perfectly interchangeable by now. Factories produce the well-known very sweet fructose syrups that can be used both for sweetening soft drinks and for alcohol production. Europe could do the same if the opportunity arises. An opportunity like the opening sugar market. Maize will be the main feedstock for sugar. And wheat, which can be transported around the world easily. Tapioca would be somewhat less obvious, although the Thai vigorously explore this pathway.

So our optimistic story about a major opportunity for the build-up of a European biobased industry of our own on the basis of beet sugar would seem to become somewhat more complicated. The story will include an increased competition. But who would call competition to be bad? We still maintain that sugar, from whatever provenance, appears to become a basis for the green chemical industry, based on these developments.