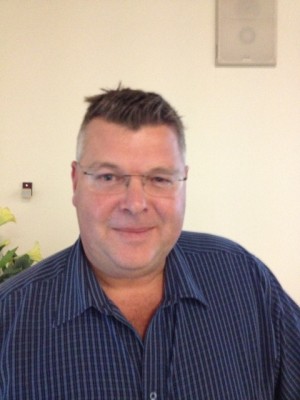 Arnoud van Diem, an entrepreneur, and CEO of AF&F (Algae Food & Fuel) and of Biosoil, grows algae at the ACRRES site in Lelystad, the Netherlands. He uses both sunlight and LED lamps emitting light of precisely the correct wavelength for photosynthesis. As a result of that, his algae grow faster than others. ‘They grow at night too, and we can also harvest in the winter,’ says he. Moreover, because of the ‘stress’ he applies to them, they produce much more oil than other algae, up to 80% of body weight.

Survival of the fattest
Mark van Loosdrecht, who developed the process, and who heads the Environmental Biotechnology Group at TU Delft, enthused him to the extent that AF&F and the TU now cooperate in scaling up the process. Mark comments: ‘In the world of algae research, there is a large community which prefers to apply sunlight exclusively, and which does not accept anything which is not sunlight based. Personally, I would prefer LED technology in the Netherlands. On the condition that it is based on sustainable electricity, of course.’ As to the slogan ‘survival of the fattest’, the person who coined this expression at the Van Loosdrecht research team, now conducts PhD research on algae with a high oil content. They succeeded earlier in producing bacteria with a high oil content, and now they appear to reproduce this success, processing algae. But outsiders take a rather skeptical view of these new and alternative pathways. Time will tell.

Apparently, Arnoud van Diem is not the only one with high hopes on this LED technology, for his project was elected to be flagship project in the Dutch Top Sector Biobased Economy. 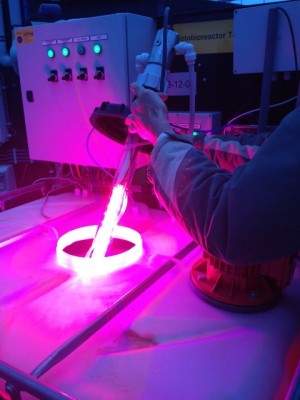 Fed by brewery waste water
LED algae grow in caverns one and a half meters in depth, being fed by brewery waste water. Arnoud harvests them with a registered special flocculation technology. ‘Our waste water is pure to the degree that is could be reused as a feedstock for breweries,’ says Arnoud. The product is ‘food grade’, meaning it can be safely used as fodder. Arnoud already has a contract for that purpose.

But entrepreneur Van Diem’s hopes are higher. According to him, algae are going to make a contribution to world food supply. That would indeed be a revolution, much more important than algae biofuel, particularly because algae oil is rich in omega 3 unsaturated fatty acids with long carbon chains (PUFAs). This would open up many more options, like (indeed) fodder, or feed for cultivated fish. And bioplastics production. The production of biofuel is not an option in the Netherlands with its limited sunlight incidence, according to Arnoud. But he is sure that algae will change the world.