You are here: Home / 2012 / September / The biobased economy challenged by shale gas, a discussion 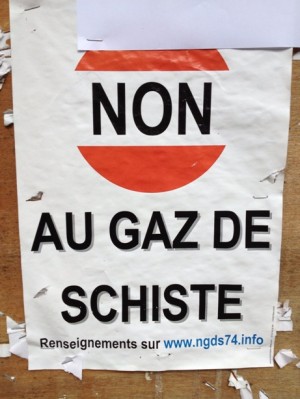 Shale gas is not universally popular

Until quite recently, a few developments seemed to be clear, at least to the editors of this website. The economy would become more sustainable by finding alternatives for oil (over the peak), natural gas (source of international conflict), and coal (too much CO2 emissions). After a long transition period, solar energy would become the main energy source; for chemical industry, biomass would become the main feedstock. But a new factor shatters this long-term perspective: cheap shale gas, a ‘game changer’ (see our column, 12 July 2012). The playing field lies wide open again.

This website will pay attention to this development in a number of articles. This is the opening of a series which, as we hope, will provide an in-depth treatment of these developments. We will welcome reactions!

Let us start with energy. To us, solar energy remains the main future energy source, electricity becoming the main energy carrier. Electric transport does not seem to meet major obstacles (except in heavy lorries and airplanes). Solar cell efficiency is high, especially when compared with photosynthesis. Contrary to common thought, solar energy is fairly evenly spread across the globe: there is only a difference of a factor 3 among areas with the highest and the lowest incidence. But solar energy will have to increase enormously before it could even stabilize CO2-emissions.
Question: when could solar energy stabilize world CO2 emissions, assuming unchanged developments?

A powerful weapon
But it would be unwise to expect oil companies to give up their leadership position without a blow. In cheap shale gas they have a powerful weapon, and reserves are very large indeed (Shell mentions a reserve of 350 years). We are not convinced of serious environmental damage by shale gas recovery, certainly not when under pressure of NGO’s, modern technology would be applied (tar sands, on the contrary, are a completely different story). Shale gas will reduce greenhouse gas emissions if it replaces oil and coal: gas emits less CO2 per unit of heat produced. CO2 emissions in the USA declined by several per cents in the past 5 years because of shale gas use. But even if its recovery would do little environmental harm, shale gas is not a solution for the greenhouse problem.
Question: will shale gas recovery be possible without much environmental harm, and be cheap?

Quick rise
Although shale gas has risen quickly in the past ten years, the roots of its recovery date far back. Originally, the oil era started with shale oil recovery, mined in open pits. Shale oil and shale gas are the decomposition products of age-old bacteria. Later, oil companies made attempts, not very successful, to recover shale oil by drilling holes containing heaters. Shale gas is in fact quite new – it has become successful only when oil companies learned how to drill horizontal holes. In those horizontal holes, chemicals and explosives render the underground porous, upon which sand is lowered in order to retain permeability in shale gas minerals.

Shale gas is very commonly present, and in large quantities. It mainly consists of methane, with varying quantities of higher hydrocarbons. The methane part can be used directly as an energy source, and fed into the existing natural gas infrastructure. In the USA, shale gas recovery has been successful to such an extent that the country foresees to become an energy exporter again. LNG-terminals for shoring foreign natural gas, are reconstructed for export. There is much shale gas in Poland, and even in the Netherlands. But in densely populated areas shale gas recovery (with the possibility of ground water pollution) will meet much popular resistance.
Question: will shale gas be recovered everywhere?

Tough battle
We can imagine a long period in which (shale) gas and PV fulfil the world’s energy needs side by side. The battle between the two could be tough. Oil companies have deep pockets, and in shale gas they have a new and cheap energy source from which they can supply the world with fossil fuels and feedstock for a long time. Not bad from an economic point of view, energy prices will remain relatively low.

Biomass will only marginally play a role in energy supply, if only because biomass use is ever more criticized. The world food market is quite unstable, there is a constant threat of biofuels aggravating a (real or perceived) shortage.
Question: when will the oil companies start to act?

Feedstock for chemistry
It is a sound strategy to use biomass for higher-value products. Therefore, biomass use as a feedstock for chemicals and materials is more promising. The driving force is not primarily the decline of oil reserves, but the development of cost-effective and sustainable chemicals and polymers. Costs will be decisive. Therefore, shale gas is a game changer for the chemical sector, too. How will biomass be able to compete on this market?

By far the most important chemical building block derived from biomass now, is ethanol. Shale gas is in direct competition with it, because in many instances it contains an appreciable amount of ethane, which can simply be processed into ethylene. Ethanol and ethylene both are an excellent feedstock for C2-chemistry. But shale gas lacks C3- and C4-building blocks, as well as aromatics. Development of these building blocks from biomass is an enormous challenge; there is a need for fundamental research, particularly in the field of heterogeneous catalysis. On this site, we reported on breaking down lignine to aromatic building blocks (see our article, 27 June 2012), but the road toward industrial deployment will be long.
Question: in which niches can green chemicals and materials best penetrate (and be able to stay in the market)?

More challenges for biomass
Biochemicals are challenged in yet other ways. They must be supplied in a very constant quality, any ‘memory effect’ in the end product is inadmissible. I.e, the end product should be completely independent from the original feedstock. Therefore, it should not make any difference whether the product is produced from corn stover, sugar beet waste, or bagasse. Nor should seasonal differences have any influence whatsoever. Producers of end products require a constant quality.

And shale gas could even serve more markets. Gasification can turn it into syngas, the traditional C1-building block. That can be further processed into methanol and higher-value Fischer-Tropsch paraffins for use in energy production and chemical industry. The side product CO2 could become interesting as well. Horticulturalists use it in their greenhouses; as a pure product, it could become a chemical feedstock, at least when CO2-economy would prove to be viable (see our article, 28 August 2012). In other words: the playing field lies wide open again, contrary to common thought even a few years ago.
Question: can green chemistry produce the high quality required ?

Structural effects
And there is more. Transforming a fossil-based chemical industry to a biobased industry will not be easy. Major structural effects will result from the inherent scale difference between agriculture and chemistry. A chemical industry wishing to use biobased feedstock, needs to have a much more small-scale organization than present companies (very interesting for SME’s!), and have chemical processes available which are cost-effective at a much smaller scale. This inherent disparity between the two economic sectors will be an important source of news on the way to a biobased economy.
Question: is the disparity in scale between agriculture and chemistry a threat or an opportunity?

The long term perspective
Biomass will be able to play an important part as a feedstock in materials production. Particularly if we can retain biomass’s complexity in materials production, in what we call a ‘holistic chemistry’. Nature produces wonderful materials like wood, egg shale and spider web, with unique properties. One of the goals of green chemistry would have to be to retain this complexity as much as possible, or manipulate it in a goal-oriented way. Instead of breaking down complexity and then starting to rebuild it from scratch, as we do now. PHA and biopolymer production from agricultural and agro-industrial waste streams, using specific cultures of microorganisms, represents an interesting step towards this holistic goal.
Question: would this line of development merit more attention?

But in the short run, there are major challenges. As stated previously, with the advent of ‘game changer’ shale gas, the playing field lies wide open again.