You are here: Home / 2012 / September / Sustainability and the bonobo 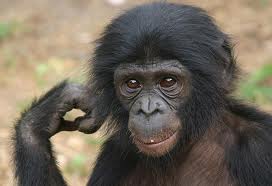 Upon hearing the word bonobo, many (in particular intellectual males) exclaim: sex!, and they beam all over. Yes, it is true: sex is important in the life of the bonobo, much more so than in that of our other nearest relative, the chimpanzee. But the bonobo also is a compassionate ape, a characteristic much less mentioned. More precisely, in the words of researcher Frans de Waal: the bonobo is characterized by compassion, altruism, and a sense of fairness.

Chimpanzees and bonobos are equidistant from us. Our common ancestor lived seven million years ago. After that, humans and apes went different ways. The division among our nearest of kin dates from about two million years. There is no reason whatsoever to assume that one or the other species better reflects human nature.

The alpha male
And yet, public life is dominated by a one-sided view on human nature: as if everyone is primarily concerned about him- or herself – like the chimpanzee. In the debate on the Euro crisis, very few people voice disdain over the common Greek’s and Spaniard’s plight, and the lack of altruism from West-Europeans. On the contrary, people are mainly concerned about their own interests (‘will they pay us back our money?’), and the bigmouth is looked upon as the alpha male. In a parallel line of thought, sustainability is judged to be a ‘difficult’ concept because it would infringe on private interest. Implicitly, society takes people to be like chimpanzees: in conflict, the private interest prevails. This is shopping selectively among our nearest of kin. We even have a branch of science, economics, which takes this pursuit of private interest as an axiom of human behaviour; in doing so, it has a major influence on policy and the public debate.

Nothing much has changed
Meanwhile, evidence accumulates on the unfavourable influence of the human chimpanzee (whatever this being’s merits may have been in the past). Recent history abounds with social failures caused by alpha males. We can easily trace back the banking crisis to the main figures’ chimpanzee characteristics. But so far, there are no policies in effect to stray them from their ways. In fact, the most astonishing thing about the banking crisis, is that, four years after Leman Brothers’ demise, authorities have not taken a single effective regulatory decision. The banks have graciously accepted government funding, and have continued in the old vein. Common treasurers of common schools or housing associations can still speculate with derivates (essentially capital risk insurances). Although there is much public outrage, we do not see bills being proposed which would reclaim damages on these vandals. It is all part and parcel of the pursuit of self-interest, is not it? Like the overexploitation of the seas for fish, is not it?

Yes, the bonobo is a peace-loving ape. But is very precise in maintaining the social balance in the group. When are we going to value better our bonobo nature, and isolate and expel those who harm others and the environment in pursuit of their self-interest?