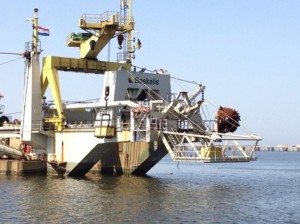 At work in Futureland

Just for a second, one forgets Europe and feels a one hundred percent Dutchman on a hot Sunday afternoon. Where? In ‘Futureland’. Again please? Right, nowadays that is the name of the second Maasvlakte, the artificial harbour area in the North Sea near Rotterdam. And I must admit: one feels proud to be a Dutchman, looking at the immense area reclaimed on the sea. About as big as Disneyland, Paris or Schiphol airport, but entirely dedicated to fully automated container transfer.

Sure, the Netherlands have Epke Zonderland and Marianne Vos, and the lady hockey team of course, but to us they catch the attention just temporarily (although they themselves dedicate years to their sport). But Futureland is different, it is going to ensure a new economic takeoff for the Netherlands, and maybe Europe. More precisely: it would have to ensure Rotterdam’s position as the major European port for the next twenty years. No longer the largest port worldwide, we have had to put that thought aside. By the way: it is hard to imagine an area bigger than that to the West of Rotterdam, first the enormous chemical industry, then oil terminals and behind those, two artificial harbours.

Until 2030
The twenty year period is a point of interest. Will chemical industry still be in place, and if not, what could replace it? And as for containers, will they still carry the bulk of world trade? Oil was not mentioned at all during our tour in Futureland. I am not sure whether that is a token of good foresight; they did not mention biomass either, although in my mind Rotterdam has high hopes for it. Anyway, it seemed wise to me that they did not have any prospects beyond 2030. On the other hand, one can easily imagine that the Rotterdam folks in Futureland just focus on their harbour’s future. It was so impressive that being there, I could not look beyond Rotterdam harbour and world trade myself.

And how about sustainability? I cannot say it will be neglected. Two thirds of all containers will directly be transported to Germany on the new Betuwe railroad or by inland ship. And for protection of the new dunes, and for better recreation on the beach, one and a half million helm plants have been hand-placed into the fresh sand. What could be more sustainable?