You are here: Home / 2022 / September / The treeline, witness to climate change

The treeline, witness to climate change

Ben Rawlence’s book The Treeline makes us aware of our dangerous path as mankind. The climate is heating up and therefore the Northern treeline moves towards the North Pole. Ben Rawlence travelled along the entire treeline and reports on it. 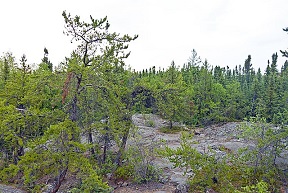 Across the world, people adapted on living on the treeline. The Inuit in Alaska, Canada and Greenland, the Sami in Scandinavia and Siberia. They witness a world in a process of change. Changes that stand in the way of them living like they did in the past. They are being drawn into our times. On top of that, some authorities, particularly those in Siberia, tried to eradicate the old culture as well as they could. These peoples are the best witnesses to the quiet disaster taking place. The loss of the border between forest and tundra; the Northbound movement of the forest; the question whether plants and animals can move quickly enough in order to keep up with these changes; the question whether the thawing permafrost will not release methane in such quantities that irreversible climate changes will take place. And the overarching question: will the Earth as we know it survive the climate crisis?

But Rawlence, who lives in Wales, starts his odyssey closer to home: in Scotland. Here there is also a treeline. Although it is fragmented, and at times illogical. The result of felling trees for centuries; followed by reforestation, not always executed skilfully. Therefore, the treeline in Scotland cannot be established with much precision. The entire highlands might be within the treeline already now. The Scots pine advances. But global warming might advance even faster. The Scots pine is already under strain in large areas in Europe. If climate models are right, Scotland might be in the same condition within a century. Not very long ago, Scotland was at the Northern treeline; at higher latitudes, temperatures were too low for the pines. But within a century it might be so hot that they will not be able to survive because of that. 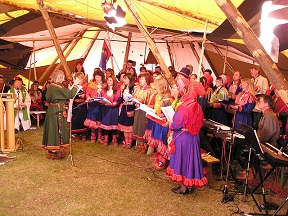 The treeline is moving

The Sami in Norway and Sweden find their traditional way of life under great strain. Strictly speaking, they are no longer able to maintain it. Trees start covering the land. Reindeer flocks react in unpredictable ways and aren’t always traceable anymore. Sami live between two worlds: traditional and modern life. The first has become almost impossible. ‘Nature is always changing – there was always a need for us to be prepared,’ says wise woman Märet. ‘I am hopeful for nature, but not so anymore for mankind.’ And it is not just the traditional way of living that is of the brink of disappearance. People’s thoughts change as well. Taking whatever nature supplies us with, becomes habitual. ‘As human beings we shouldn’t destroy the food or the habitat of other animals. We should just take whatever we need, for you are not the only living being,’ says Märet.

Just take from nature whatever we need. According to Rawlence, this quite the opposite of the modern concept of sustainability. For the latter is grounded in the maximum amount we can take from nature without disturbing the resource. But is he right? Beyond sustainability there is exhaustion of resources. Märets concept holds if there are few people and much nature – but in our reality, there are many people and little nature. To what lengths should we have to go for a sustainable life? 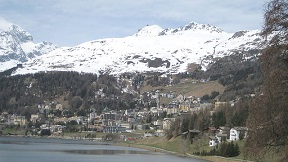 On the Siberian taiga, Rawlence finds the larch as the dominant tree. It is very adaptable and shows a large range of appearances. The area dominated by larches can be thousands of kilometres in width here. Like in Sweden, here the treeline moves North as well. But the real change takes place at the Southern border of the wood. The forest dries down, fires become more common. The steppe bordering the wood on the Southern side, moves North as well. And then swallows the taiga. For on this border, fires are more common. If that has happened a few times, it has become almost impossible for trees to develop roots. The taiga isn’t able to regenerate itself. After a few fires, steppe grasses take over the area. These prevent trees from germinating and smother other species. The largest forest in the world dies down at its Southern border. At this speed, almost half of the forest will have been turned to steppe by the end of this century. There is just a single sign of hope: in the moderate climate that will prevail there, mankind will be able to perform agriculture. Might be a refuge for people who would like to flee the tropics, then having become almost unlivable for mankind.

In Alaska, Lawrence finds yet another dominating tree species: the spruce. Here, as elsewhere, the treeline moves North. The arctic becomes greener; this was demonstrated by aerial photography around the turn of the century. Remarkably, the beaver plays an important role in this process. Their control over surface water paves the way for trees. Heat conductivity of water is better than that of land. Creating larger and deeper ponds will create a source of warmth near the soil, the permafrost. A new ecosystem develops. ‘Beavers are first-class geo-engineers.’ White spruce will move in soon. Salmons will follow. But at times, the rivers aren’t cold enough anymore for the salmon to spawn. And the oil industry turned the entire state upside down.

Can these developments be reversed? There are important self-propelling factors. Forests will emit less water; therefore, less rain will fall and there will be less wind. Less wind in the summer will cause dehydration. This will promote fire. These trends can be reversed – but then, a lot needs to change. Likewise, on the treeline in Canada and Greenland, climate change manifests itself.

Trees and humans live in the same climatic conditions. Ever since the ice age, people settled in habitats originating from the treeline moving up North. And we left our traces there. People felled woods and farmed the land. For some time, we created new conditions in doing so, and elevated the biodiversity on the planet. But from the advent of capitalism onwards, Rawlence says, this positive influence has come to an end.

The changes described by Rawlence are dramatic. There is not a single mile of the treeline that doesn’t undergo these changes. The planet is heating up, and quickly – we cannot escape from 2o heating anymore, he says. But remarkably, the book’s message isn’t fatalistic. It is an invitation to participate: to explore, experience, get lost or find your way. The planet depends on us and the next generation. It now calls upon us to save it, the positive side of a disaster. Strife gives rise to hope, says Rawlence, not the other way around. Despair is the first step towards repair. We can develop strength from the acknowledgement of earlier damage. Hope is in the common effort for the good.

We are on the brink of a new era of our planet. It depends on us, how this will look like.

Interesting? Then also read:
Stepwise changes, a ray of sunshine in the climate debate
Against desertification
High hopes for holism