Profit is important but not our only driving force, says Michiel Vos. He is founder of CocoPallet, a company that produces pallets from the husks of coconuts. We already interviewed him five years ago. His company still exists, and it still has the same goal: create value from the byproduct of the coconut industry. Even though developments have been much slower than desired and expected.

‘Profit isn’t our main goal,’ says Michiel, ‘it’s impact. We are driven by the desire to create value for the stakeholders. For farmers, investors, shareholders, customers. We operate in a holistic way, looking for processes that make a difference. If profit had been our main goal, we wouldn’t have existed anymore. We just wouldn’t have had the motivation to move on when things were really tough. You need a stronger drive. I guess they call it grit these days. We have lots of that. It is important for us what motivates our co-workers. People only motivated by profit don’t fit in our team. But of course you need a profitable operation in order to scale and have impact. We are not an NGO or a not-for-profit organization. That holds true for shareholders as well: we look for people motivated by our solution. Investment money is everywhere, but we are only open to aligned investors that share the mission. We’re looking for smart money, so to speak.’

CocoPallet produces pallets made from the fibres of the husk of the coconut. Anything that surrounds the coconut itself, the airbag so to speak that protects the nut as it falls down some 20 or 30 metres. At present, these husks are a waste product, just 5-10% is being used in the countries where CocoPallet is active. The remainder slowly rots. Or it is being burnt, will all concomitant environmental problems. And there is a huge number of coconuts in the world. Just the Philippines and Indonesia each harvest some 15-16 billion coconuts each year.

CocoPallet develops a market for this waste material; in the form of pallets. Pallets, mainly used for transporting goods from Asia, the world’s production area, to Europe and the United States, are produced from softwood now. But Asia doesn’t produce much softwood. Therefore these are produced for instance from pine, grown in Scandinavia, North America, New Zealand and Australia. The wood is being transported to the production countries, processed and charged there. And by the end of their useful life, much is being incinerated, because transporting them back is too expensive, and the quality of these export pallets is not good enough for use as a pooling pallet.

CocoPallet has devoted many years to optimizing pallet production. Coco fibres are heated and pressed – that’s the production process. To what temperature and at what pressure – that is the trade secret. The company doesn’t intend to file for a patent on its process. As they say in China: ‘copyright is the right to copy’. In filing for a patent, the company would need to describe in detail all components of the production process. Copy-ready. But they did file for an IP on their design, and on the trade name. 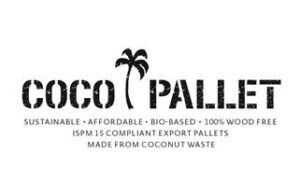 By now, they have settled for the design of their pallets. Their small Amsterdam office houses pallets of various designs. A flat pallet isn’t strong enough; therefore they made a design with curbs and ribs. But then, the design needs to shy away from straight lines, pallets easily break along these lines – think of a chocolate bar. So, in designing the pallet, the producers use many curves, inspired by nature (biomimicry). Nature taught them how to solve such problems.

The importance of logistics

In the end, consumer preferences determine the pallets’ properties. What do they need? What weight will the pallet have to carry? What are preferred measurements for the pallet? Ultimately, the product needs to fulfil three conditions. It needs to be strong enough to carry the load, it needs to be export-compliant, and it needs to be cost-competitive. All other characteristics are nice to have; the pallet’s weight for instance, mostly isn’t of decisive importance.

Logistics are decisive for process operations. CocoPallets are going to be produced in the country of origin; in locations with a wealth of waste material. This material cannot be transported along major distances; therefore, the factories’ capacities are determined by the economically feasible distance to the coconut plantations. And then, when they have reached their destination, they aren’t transported back – that business model has never proved to be successful. But there is an excellent way to process the pallets in countries of destination. The pallets are being chopped up or milled, resulting in a product that can be used for soil improvement. Tested by Wageningen University and Research in Bleiswijk (the Netherlands). The substance is sterile because of the production process and breaks down slowly. It is an excellent substitute for turf, absorbs a lot of moisture in a non-compressed state; and, importantly, it contributes to the receiver’s profits.

CocoPallet has now reached the stage of building a first plant in the Philippines. There are a lot of coconuts available there, and logistics are in place. By the end of 2023, a full-scale factory will be in operation. Shortly afterwards, a second and a third one. After 4 to 5 years, operations will start in another country.

Wageningen University and Research also provided them with a recipe for a flat sheet material, to be used in the construction trade. A product with little absorption and little swelling. It resembles MDF (medium-density fiberboard) – but with one important difference: it is harder and holes need to be drilled in advance. And at times, they have ideas about producing other products from their resources. Palm oil kernels are an interesting prospective resource. They produce at most 16% in weight in oil; the remainder consists of fibres. Cellulose for instance could be extracted from this resource, a product much in demand. Wageningen UR developed an industrial process for this. Rice has a comparable waste product: chaff. But this product is very seasonal.

And then, bananas. They receive a lot of inquiries from the banana industry. For the transport of bananas, industry needs millions of one-way pallets each year. CocoPallet might well be able to develop a pallet for that market, together with stakeholders; with holes for air circulation and ripening. There too, much vegetal waste that could be used for pallet production. Although coconuts have one major advantage: they are being produced regularly, not seasonally variable. That makes a lot of difference in terms of seasonal storage of the resource. And if there are enough coconuts around, CocoPallet could reduce considerably cost and CO2 release in the supply chain for fruits and vegetables.

At present. CocoPallet’s core team consists of five people. Around them a circle of technicians and software developers, primarily from the wood processing and automotive industries. The sourcing software is being supplied by a Kenyan company, Eprod Solutions. There are partners in the producing countries. Kiel Flores is the Filippino CCO and a very important team member; living in Manila, het is their boots in the ground. Especially during the Covid pandemic he kept things going for the company in Asia. Kiel worked for 8 years with Loscam, the largest pallet company in Asia. Now he works full time with CocoPallet. As stressed earlier: the company looks primarily for people embracing the same values.

The company is rooted firmly in the economic truth that world-wide pallet transport doesn’t make sense at the moment. The wood from which pallets are being produced, grows in the wrong places. The coconut grows in the right place, and there is an abundant supply of the fibre. A huge volume is available for the production of CocoPallets. For the time being: the sky is the limit. ‘If we should succeed in producing 50 million CocoPallets each year, we probably would be able to sell them as well.’ Says Michiel Vos.

Interesting? Then also read:
CocoPallet: grow in niches and compete on price, says Michiel Vos
Processed banana leaves, an eco-friendly packaging solution
Fibres of the future: cotton and its limits

Never Give Up On Humans Rights 🌎💚 🌱 No DM
@OChenault

Bigger isn't always better... #sustainability #knowledge #wealth youtube.com/shorts/sbiCvTk… via @YouTube My dream to live off the grid with wind & solar near the sea to smell salt air. I can walk or drive to see it.

Had a blast this afternoon being interviewed for a Podcast with AFPA’s Rockstar Comms Director, ⁦@AspenDudzic⁩ and working with the great Team ⁦@RoadFiftyFive⁩. Stay tuned…#Loveabforests #greeneconomy #sustainability pic.twitter.com/j7hlLae9Nt

Feeling like a #feministbooks moment? We are very proud of our feminist literature collection. So much to learn. So much to share #Snailfishbooks #secondhandbooks #sustainability pic.twitter.com/3Lvfk9ohxK

#Sustainability in #Retail is a board-level agenda. But balancing the call for a lower carbon footprint with increased spending on digital adoption is a huge challenge. Well, it doesn't need to be an either-or decision. Read more in my latest blog ow.ly/yZRg50LTy9P

We need to welcome 5G, but we need to pay attention to the potential increase in energy consumption due to the proliferation of connected devices. #Infographic by @antgrasso #5G #Sustainability #Energy #IoT pic.twitter.com/S8ukHtRymV