Under the skin we are still Darwinists. Meaning that all living creatures are in a state of competition with each other. The strong drive out the weak, that’s how progress works. But recent research shows that on the contrary, there is much cooperation in living nature. One of the protagonists of this view, Suzanne Simard, a Canadian, wrote an admirable book about her discoveries. 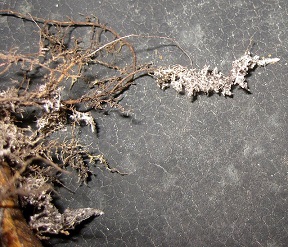 Simard’s book, Finding the Mother Tree, recounts the development of her view in step with her personal growth. Having grown up near the forest, she feels that logging trees as it has developed in recent decades, does much harm to nature. And she starts research in order to find proof of this. In the beginning, she is being ignored. Or even ridiculed. It is not helpful that she is a very shy person by nature. But in the end, she becomes one of the most respected forest ecologists globally. Her vision, in the words of her website, is ‘that trees are not simply the source of timber or pulp, but are a complex, interdependent circle of life; that forests are social, cooperative creatures connected through underground networks by which trees communicate their vitality and vulnerabilities with communal lives not that different from our own.’

When Simard starts her work, cooperation in living nature is not a very fashionable concept. Forestry practices are dominated exclusively by attempts to maximize the yield of the preferred species. ‘We emphasize factions instead of coalitions. In forestry, the theory of dominance is put into practice through weeding, spacing, thinning, and other methods that promote growth of the prize individuals. In agriculture, it provides the rationale for multimillion-dollar pesticide, fertilizer, and genetic programs to promote single high-yield crops instead of diverse fields’ (p.140). So, if we accept Simard’s view, we might have to review our agricultural practices as well as our forestry practices. But the book concentrates on forestry and doesn’t elaborate a view on agriculture. 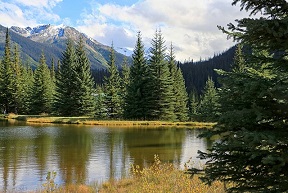 In her research, Simard reveals the practice of cooperation in living nature step by step. First, she shows that in the early stages of growth of the wood, birches help conifers to grow and stay healthy. Instead of destroying the birches (by cutting them down or treating them with a weed killer) we should welcome them if we should wish to grow a healthy pine forest. The root of this cooperation lies in the soil mycorrhiza – fungi that live around and partly inside the trees’ roots. They supply the tree with nutrients and water, from much farther away than if the tree would have to rely on the roots and hair roots of its own. The mycorrhiza act as messengers in the forest, bringing good news and warning the community of bad news coming. They can even exchange nutrients among different species. They supply the conifers with sugars produced by the birches, when the former are young and small, and don’t receive enough sunlight to sustain growth. Conversely, they supply the birches with sugars produced by the conifers, when these have outgrown their former helpers and now overshadow them. Cooperation in living nature, not competition!

There are four families of mycorrhizal fungi; part of them attuned to a specific tree family and a specific task. In her research, Simard unravels their function step by step. She discovers the wisdom in ancient customs of Indian tribes, who always plant certain species together, for instance alder and fir; thereby promoting the growth and functioning of the mycorrhizal community. She shows why it is unwise to plant monocultures. Even if the trees grow large, they appear to be much more vulnerable to pests and pathogens because they are not sustained by a healthy soil. The pace of genetic mutations in the fungi is much larger than that of trees, so the fungi help the forest to adapt to changing conditions like climate change. 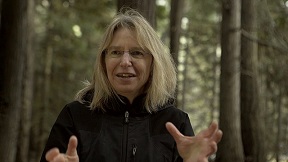 Simard takes the idea of cooperation in living nature even a step further; she wonders if selective growth could also operate on the level of the forest community. In the way people in a village become mutually dependent on each other. Trees, mycorrhiza and bacteria form a community in which carbon and nitrogen are traded among species; the whole then also protects the trees from infections and pests. ‘Ecosystems are so similar to human societies – they’re built on relationships. The stronger those are, the more resilient the system’ (p.189). ‘Through this cohesion, our systems develop into something whole and resilient. They are complex. Self-organizing. They have the hallmark of intelligence’ (p.190).

And then, Simard develops the concept of hubs and nodes in the forest. Old trees acting as hubs and young ones as nodes. A new level of cooperation in living nature. There are Mother Trees out there, on which an entire community relies. Through the mycorrhizal networks, they send and receive messages. The network functions much like our nervous system. If Mother Trees die (and in the end, all of them will), they appear to send extra sugars to the surviving family – not just to her kin but to other species as well. There is cooperation in living nature from beginning to end, from birth to death.

Simard concludes that there is wisdom in nature. Plants and trees perceive, relate and communicate. They cooperate, make decisions, learn and remember. By noting how trees, animals and even fungi have this agency, we can acknowledge that they deserve as much regard as we accord ourselves. Mistreatment of one species is mistreatment of all (p.294). Summing up, ‘everything has a purpose, and everything is in need of care’ (p.303).

The book is very well-written, interweaving Simard’s personal development and the unfolding of her scientific discoveries and views. I have been looking for an acknowledgement of the editor responsible for these qualities. And in the end I found her. Her name is Katherine Vaz. She ‘supported and encouraged’ the author from the first words until the end. With a very fine book as the result.

Interesting? Then also read:
There is no such thing as an individual
Healthy soils for a productive bioeconomy
Review: biostimulants for sustainable crop production