You are here: Home / 2017 / March / Biokits with Do-It-Yourself genetic engineering could involve a criminal act

A number of American companies offer Do-It-Yourself genetic engineering kits on the internet, in order to practice Synthetic Biology and Biological Design at home. With these biokits one can alter the genetics of living organisms such as E. Coli-bacteria or yeast. Examples can be found at DIY and Education. Amino Labs and Biorealize, together called ‘Accessible Bio’-companies, are two of the companies behind the development of such biokits. 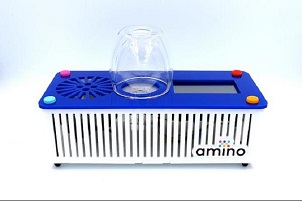 A gene engineering kit such as supplied by Amino Labs, Canada

Biokits are on the market

The intention of the scientists designing such biokits is to make synthetic biology accessible to everyone and to support biotech education. According to Orkan Telhan, co-founder of Biorealize, ‘…anyone who is interested in exploring the world of the living should be able to pursue it, whether it is through DIY Biology, Biohacking or PhDs in Life Sciences.’

I fully agree with this. Contemporary history shows the importance of science being fully transparent, in order to give society the chance to prepare for new technologies. By putting the scientist’s workloads into the public domain, they can be monitored by scientists and non-scientists alike. Without doubt, this applies to synthetic biology.

According Johan Cruijff: you only will see once you’ve figured it out

‘I believe in the importance of science vulgarization,’ says Daniela Quaglia, a prominent scientific communicator with a close history to the SynBioBeta community in an interview published in Synbiobeta Digest, February 15th, 2017. Daniela goes on by stating: ‘What I always see when I have conversations with people who are not scientists, I see that they are not willing to listen. It kind of scares them, because they don’t understand it. So, it is fundamental to have people that can make complex concepts easier for people who are not trained to understand.’

Using the biokits shows you how the procedure of gene editing is carried out. It is safe, in that you work with a harmless pre-programmed DNA-molecule, called a plasmide, and a defective, non-pathogenic, bacterial strain (Escherichia Coli HME63). You trick living bacteria or yeast cells into using the DNA-molecule to produce something: a smell, a colour or a pigment, or a fluorescent protein. It’s like installing a cookie on a working computer to obtain a pre-destined result, the difference being that you cannot program your own DNA-molecule, let alone that you could build it. Used organisms can be disposed of using everyday household cleaning products: soap and bleach.

But is it a criminal act to figure it out?

In North America, biokits do not require regulated containment as they are considered non-harmful to humans or the environment. However, on January 25th 2017, the German government published a declaration that outlines the current legislation for the handling of such ‘DIY genetic engineering kits’. This declaration warns that using the offered gen-technology could involve a criminal act, as in Germany the production of Genetically Modified Organisms (GMOs) is only allowed in accredited and safeguarded laboratories, under the supervision of expert project managers. Using a gentech kit outside such a laboratory can result in a fine up to € 50.000. If using such a kit results in GMOs being released, even imprisonment for up to three years can be awarded.

The German declaration brings evident legal uncertainties surrounding the use of DIY-bio in the home, and it can be regarded as a timely reminder of the containment level and the environment required in European countries to complete genetic engineering tasks. In a number of countries in Europe accredited DIY-biolabs exist, for instance in the Netherlands the Waag Society in Amsterdam. Nevertheless, Making-with-Biology outside universities and corporations is now an exciting and feasible exercise, and it becomes important for governments to describe clearly current laws and regulations. Who can do genetic engineering experiments and where can they do them?

Call for a dialogue

Therefore, the Accessible Bio companies urged all actors and stakeholders to start a dialogue to address the regulatory concerns together, without the need to contemplate, pass and/or enforce regulation due to fear and unverified opinions. I think this is a very sensible thing to do. The bio-economy goes beyond the romantic idea of growing and using renewable feedstock. Synthetic biology and biological design will be essential parts of a bio-economy. Understanding the developments in these fields will help to prepare society and governments in forecasting what the likely influence of these technologies will be.