Synthetic Biology (SynBio) includes a large field of applications. Within this area biochemists combine engineering concepts and techniques with biology to design new genes that produce a specific protein. When this protein is an enzyme, bacteria and yeast in which such a gene is implanted can produce specific chemicals through a fermentation process. A large and growing number of businesses is active in this field. This became apparent once again at the EFIB-conference in Glasgow, last October. The workshop was chaired by John Cumbers, founder of the American SynBioBeta, an internet-site dedicated to sharing information and news on synthetic biology.

The DNA sequence codes for the production of proteins. Photo: FreeImages.com/schulergd.

The UK plans to play an important role internationally

It became clear in Glasgow that the United Kingdom plans to play an important role in the area of SynBio. The UK Synthetic Biology Strategic Plan 2016, published by the Synthetic Biology Leadership Council, expects SynBio to be a key for creating new industrial processes, using a wider range of green feedstocks, and generating a greater diversity of products.

At the workshop Susan Rosser, Synthetic Biology professor at the University of Edinburgh, said that in Scotland alone already 6 universities have SynBio-research capacity. Her own university has committed 15 million pounds to SynBio-research. Rossers’ laboratory for instance is collaborating with Unilever to synthesise DNA-molecules to produce new surfactants in yeast. Another area of research involves developing Microbial Fuel Cells (MFCs). MFCs generate renewable electricity from a vast array of carbon sources such as waste-water or agricultural by-products, using electron flow from a biofilm toward an anode. Still another research area involves engineering nitrogen fixation into a cyanobacterium so that these convert nitrogen to nitrate, necessary for crop growth. This process should help to replace a high energy consuming fertilizer production process.

According to James Field, from London-based LabGenius, 22% of existing multinationals could enhance production with SynBio. And, based on a quick analysis, Cyrille Pauthenier from Abolis Biotechnologies suggested that 30% of currently available chemicals could also be produced using SynBio. Accordingly, during EFIB a large diversity of innovative production options were presented in which SynBio plays a crucial role. Such as the French start-up Pili, that produces bio-colourants and inks using bacteria, or the British Chain Biotech, looking for a partner to start the production of butanediol by means of their SynBio-process. Or the Edinburgh-located Biotangents that uses SynBio-technology to develop a modular constructed biosensor in a paper device to test for illnesses without the intervention of a laboratory. And similarly for industrial biotechnology: French Global Energies is working on a 50.000 ton butene fermentation plant, to be realised in 2018. And Covestro, formerly Bayer Material Science, is looking for a collaboration partner to produce phenol using their fermentation process. 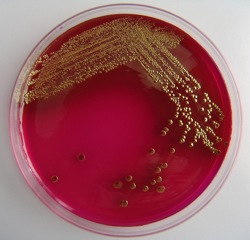 The E.coli bacterium is one of the ‘workhorses’ in SynBio. Photo: FreeImages.com/Renata Horvat.

Ian Archer, technical director at The Industrial Biotechnologies Innovation Centre, IBioIC, emphasized the need for better predictability and control of SynBio-technology. The challenge according mr. Archer is controlling the many variables that affect the process of producing chemicals, starting with designing and building a DNA-molecule. This forms the basis for the production of RNA, which in turn will make the enzymes that constitute the basis for producing chemicals from the appropriate feedstock. To acquire a better insight into the biochemical processes, a better standardization is essential, mr. Archer said.

Also the UK Synthetic Biology Strategic Plan 2016 mentions the need for internationally recognised standards for assembled bio-synthetic parts, for metrology and for the required data formats for the seamless transfer between laboratories. Innovate UK, the innovation agency of the British government, has funded the British Standard Institution to produce guidelines on the use of SynBio-standards. The importance of these guidelines becomes clear when viewing the many steps in the engineering process: Design-Build-Test-Learn, and back again to Design. A trial-and-error process that can easily be repeated thousands of times before obtaining the desired optimal result.

The SynBio-engineering process is elaborately automatized

In practice every SynBio-process step is elaborately automatized and robotised, and each of these steps is facilitated by a multitude of small companies. Often by applying dedicated, proprietary or non-proprietary, technology. According to Richard Johnson, member of the US National Academy of Sciences and an expert in the area of industrialisation of biology, in the US alone over 300 new SynBio-SMEs have been established in the last five years. These include so-called cloud labs, offering laboratory capacity. Clients can send sample material to these cloud labs, after which they can set up experiments to be executed via cloud software. The cloud lab will carry out the experiments and will make the test results available, again in the cloud. Examples of such cloud labs are Transcriptic en Emarald Cloud Laboratory, both not completely coincidentally located near Silicon Valley!

Computer Assisted Design software like GenoCAD or TinkerCell are also available to support engineering of bio-synthesis systems. And a company such as Twist Biosciences, with an exhibition booth at EFIB, offers capacity to synthesize the designed genes and DNA-molecules in practice, after which the acquired material is sent back to the client for further research. Twist can synthesise all possible gene variants. Each variant of such a gene will produce the same protein, however each time with a different form and, because of that, a different function.  An overview of all variants of a gene is called a ‘library’ and by screening such a library, i.e. laboratory testing, a protein’s optimal desired function can be identified. This is the field of rapid prototyping. The faster and more precise this process can be run through, the cheaper it is to develop new genes.

Making a new design work is the most critical

The next stage involves making the newly designed genes actually function in biological systems, like bacteria or yeasts. This is the most critical phase. First of all a carrier for the new genes, that will act as a transportation vehicle for the new DNA-molecule, has to be found. Such a carrier is called a ‘vector’. This vector will insert the engineered DNA-molecule into the selected host cell such as a bacteria, in order to clone it until a sufficiently large volume of DNA is obtained. The next step is to incorporate the newly obtained DNA in still another host, a bacteria or a yeast, in which the DNA-molecule can come to expression and start producing the desired protein.

Next to a chromosomal hereditary DNA-molecule, bacteria contain small DNA-molecules called plasmides. Such a plasmide can replicate separately of other bacterial DNA, and it is these plasmides that are widely used as vectors for newly constructed genes. There are many ready-made artificial plasmides available to incorporate new genes.

Also the design process to bring new DNA to expression can be outsourced to a large number of specialised companies. For instance Ginko Bioworks, located in Boston, cooperates with big clients to develop fragrances and flavours. But the company also works on developing an organic pesticide. Ginko collaborates with Twist Biosciences regarding the supply of synthetic DNA. This requires large investments: Ginko obtained funding for $154 million in the past two years, notably to buy DNA-libraries. The same story goes for San Francisco based Zymergen, that raised $130 million.

Twist Biosciences uses CRISPR-Cas9 technology in order to synthesize a gene up to the level of a single location. It is this technology that speeds up SynBio. It has become the tool to synthesize genes quickly and with unprecedented precision, which is important, as large numbers are involved. DNA consists of a strand of so-called base pairs, and Ginko will use its available resources to buy 400 million new base pairs from Twist.