Pharmafilter is a Dutch company that has developed a new and sustainable system for processing hospital waste. It produces devices like bed-pans and urinals from a biobased and biodegradable plastic; these can be ground after single use, and processed in the hospital’s central waste treatment installation. The system is commercially available now, the second commercial contract has been signed recently. 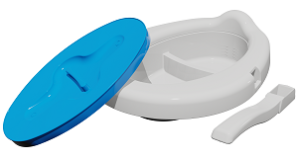 Olla, Pharmafilter’s bed-pan. Because of its composition, is does not feel warm or cold to the skin

Hygiene, safety and efficiency
Pharmafilter calls its innovation ‘a strategic and cost-effective investment’. Installation of the system is motivated by rising environmental levies and the need to improve on sustainability; but the company also points at better hospitality as a major advantage. The Pharmafilter system reduces waste, drinking water and bed-pan cleaner costs, as well as sewerage charges. And the system improves hygiene and safety, as well as the efficiency of health care and logistics.

Logistics is an important part of hospital organisation, which includes treatment of potentially contaminated materials. In a traditional system, personnel collects used bed-pans, takes them to the cleaner, and cleans them. Because of procedural errors, often thirty to forty percent of reused equipment is contaminated, says Pharmafilter’s Eduardo van den Berg. But Pharmafilter’s system is once-through. Its bed-pans and urinals are produced from a biodegradable plastic, which allows the hospital to grind them and transport them directly through the drain to its water treatment facility. Together with food and specific hospital waste streams. 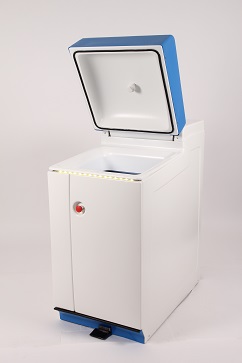 To grind and to purify
Grinders at the hospital’s units are an important part of the system. Use of the grinders adds to patients’ and nurses’ safety and hygiene. Waste is no longer collected, put in containers and transported through corridors and lifts. This saves time in logistics and cleaning; corridors and lifts will be less crowded; and the system reduces chances of contamination and contagion.

The water treatment facility decomposes rests of medicines and other environmentally harmful substances and produces clean water. The organic waste, together with the ground plastic equipment, produces biogas that feeds the hospital’s electricity and heat generator. Non-fermentable waste is dried and decontaminated, and transported to a waste incinerator. Water from the water treatment facility can be reused as process water, for instance for flushing toilets.

The bioplastic and its processing
Pharmafilter itself developed the plastic used. Its components are potato starch, PHB, and additives, the nature and composition of which are kept secret. The plastic has been developed specifically for treatment in anaerobic fermenters, whereas most biodegradable plastics rather have been devised for aerobic treatment. The end product consists almost exclusively of biogas: a mixture of methane and carbon dioxide, and some water. The fermenters have been tested for their good operation; they are reliable under the right conditions. Their stability is enhanced by the fact that the supply of bioplastics is just a small part of total feedstock supply.

For St. Francis Hospital in Rotterdam, the contract party in Pharmafilter’s latest deal, the system is an important part of their sustainability program. The hospital aims at reducing energy and water consumption, waste production and transport movements. ‘Our deployment of the Pharmafilter system unites care and sustainability, because it improves hygiene in patient care,’ says Wim van Schie, St. Francis Hospital’s facility manager.